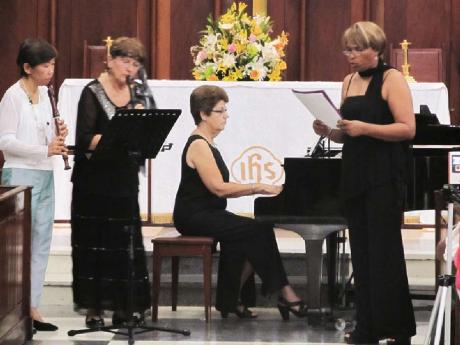 From left: Yoko Yamaguchi, Rosena Moder, Teresita Iraneta Ruiz and soprano Marcia Hall perform during the Out Of Many One Music concert at the University of the West Indies Chapel on Saturday. - Photo by Marcia Rowe

Music is a universal language. That language spoke loudly on Saturday night.

Beautifully composed music from as far as Israel and Japan performed by representatives and non-representatives of these countries filled the chapel of the University of the West Indies, Mona. The occasion was the Friendship Society's launch concert, Out of Many One Music.

But while the content was of a high standard and gratifying, at the heart of the fund-raising concert, organised by Music Unites Jamaica Foundation, was its main mission - to raise funds for needy and talented music students and musical projects. At the helm of the concert and the driving force for needy students was the foundation's founding member, Rosena Christina Moder.

Her desire is summed up in the words of a song, "Who feels it knows the score, I feel it. And if you feel it, you know it." Born to parents who were not wealthy in rural Austria, she too experienced challenges during her period of study.

But she was able to achieve her goals by working at a menial job and with the help of a scholarship.

"But the scholarship was still not enough. I had to work in almost a full-time job, in addition to full-time studying. So I feel it. I teach at school of music. And I feel it for the students who come with the biggest talent, but do not have the means to study. And some of the biggest talent come from family with financial circumstances and parents who are unable to help their kids," Moder explained to The Gleaner.

The foundation is also concerned about "the classical music of unsung heroes. Many do not know that Jamaican classical music goes back to 1773. So we have to get the national pride going. We have to put the spotlight on composers, on their achievements," said Moder.

And so, the concert, Out of Many One Music was also in honour of Dr Don Shirley, internationally acclaimed Jamaican composer.

Aptly, Felsted's composition, Lord I Obey, an aria, from Jamaican oratorio Jonah, the first oratorio written in the Americas, was the programme opener. It was performed by Marcia Hall on soprano, Terisita Iraneta Ruiz on piano, and Yoko Yamaguchi and Moder on recorder.

Yamaguchi on bass recorder, and Ulla Wykoff on soprano recorder, along with Tony Tonouchi on guitar, gave a lovely rendition of a medley of traditional Japanese songs arranged by Kozo Yashida.

Saldenger, this time on flute, with accompaniment from Richards, wrapped up the first half of the show with some traditional Irish songs.

All three pieces, Lament for Staker, Boys of Loch and Drowsy Maggie were well performed.

The second half began as it ended, with the Pimento Players giving a splendid performance. The quartet began with Wolfgang Amadeus Mozart's Rondo from G-Monor Piano Quartet. The group closed the concert with the Peter Ashbourne-arranged Jamaica Folk String for Quartet.

The quartet comprised Ashbourne and Miranda Lovell Prescott on violin, Daren Young on viola and Alejandro Gonzalez Beltran on cello.

Colombia-born Gonzalez Beltran debuted his composition titled Danza for cello and piano. The rather soothing piece was written four years ago.

On the other hand, Jamaicans Joel Moder, Ashbourne and Orville Hammond, a lecturer at EMC, paid tribute to Don Shirley with Kiting and Around Noon.

"It is easier to for me to do Felsted because that is the kind of music I play. When you listen to Don Shirley, it is so complicated. He is so complex. And his string quartet music scores are all packed up in boxes." And Don, who is eighty-five, does not know where they are.

Among those who enjoyed the evening's proceedings was Ambassador Hiroshi Yamaguchi of the Japanese embassy in Kingston. He thought "the content of the show was great, and the level of the standard was so high".

"I am so much surprised," he said.