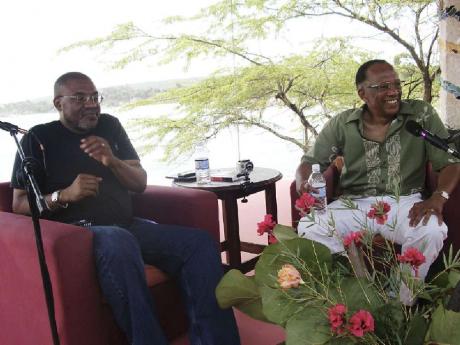 As part of the Calabash tradition, notable writers are often interviewed. This is usually done in an open setting in full view and hearing of the audience. At the festival this year, Kwame Dawes did an interview with Orlando Patterson. Patterson, who is currently a professor of sociology at Harvard, is Jamaican.

He is very keen on history and said to understand Jamaica, one has to understand the history of the country. Among the things discussed included his life and inspiration for his book The Children of Sisyphus.

That discussion reinterpreted the Sisyphean myth within a Jamaican context. The book features the daily struggles of persons in 'Dungle', an allegorical representation of Arnett Gardens (Jungle).

Patterson said he wanted to represent the struggle persons faced daily. He also referred to his book Freedom and the Making of Western Culture where he puts forward the thesis that the idea of freedom itself emerged from the conditions of slavery in primitive societies.

Patterson asserted that he discovered a disturbing version of history where at the high points of western civilisation, society was based on slave labour similar to that in the Caribbean.

Patterson said Jamaicans were exposed to the harshest forms of slavery in the new world. In Jamaica, Patterson said, no provision was made for pregnant women. He referred to the diary of Thomas Thistlewood, the slave master who documented some of the atrocities he meted out to slaves.

Patterson explained that Jamaica had a system which had far-reaching effects evident in today's society. Some of the related problems include: the relations between men and women, problems in attitudes towards authority and lack of discipline.

On the other hand, he asserted that such hardships also created a strong sense of independence and a love of freedom that Jamaicans are famed for, prowess in the arts and creativity which at times is a derivative of the recklessness that characterises Jamaica.

Patterson was asked to speak about the direction Jamaica was going in and what that would mean for the future.

The author explained that for there to be a future worth anything, there needed to be basic changes in attitudes. Expounding further, Patterson later told The Gleaner that what is currently needed is "the discipline to create the institutions to build a prosperous society and the fairness and sense of justice which will lead to a reduction in inequality".