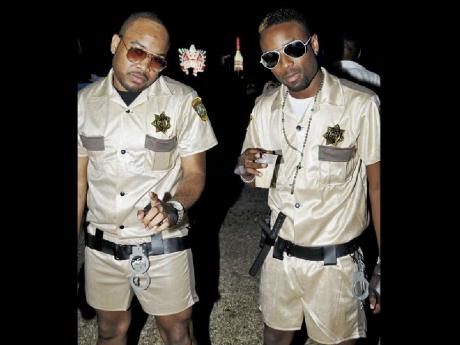 Even the police had a 'Twisted' view of things. These two dressed as officers during Smirnoff Twisted Spiritz at Caymanas Polo Club, St Catherine, last Saturday night. - Winston Sill/Freelance Photographer

It seemed as if the twisted experience over the years had only been building up to the 10th anniversary celebrations of Twisted Spirits on Saturday night at the Caymanas Polo Club.

The journey to the St Catherine-based venue was certainly worth it, as the event did well in providing solid entertainment for its patrons.

With DJ Nicco at the controls, Neyo's Sexy Love pumping from the speakers, early patrons in a scanty venue had something to rock to before the 'warm up segment' at 12:30 began with Give It Up To Me.

Patrons got the chance to prepare for a night of dancing by frequenting the bars. Those who didn't were lucky that the organisers had arranged for several females to walk with drink mixes on a tray throughout the venue.

The Bookshelf rhythm and a few songs later, DJ Nicco ended his set, making way for Coppershot Sound, which was excellent throughout the night.

Vybz Kartel was toasted in the early goings with Locked Up remix and They Got To Free Me.

Playing Ludacris' When I Move, Cutty shouted, "And this is how we start the party!" And he was right.

The crowd, which at 1:20 in the morning had grown considerably larger, was fed with hit after hit.

Coppershot did start the party, as the crowd was noticeably more active throughout their set.

The females who seemed to have gone all out in dressing for the event were fêted by ZJ Liquid as he had them dancing the night away in his set, which began with slow R&B mixes.

In the wee hours of Sunday morning, there was not very much space inside the Caymanas Polo Club, a state which remained until the event ended.

Twisted Spirits, the kickoff event of the Dream Weekend, was a definite hit. The build-up continues next week with the staging of Yush.