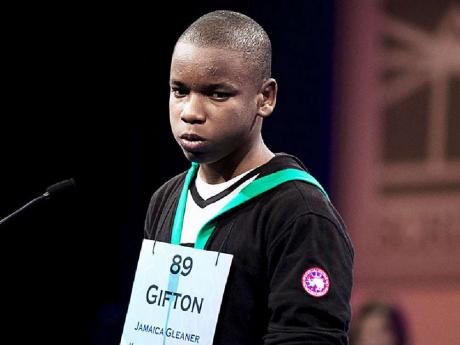 It was an absolute joy to behold little Gifton Wright spell his heart out last Thursday evening at the Scripps National Spelling Bee Final in Maryland, USA. He tied for fourth place. Like I always do for other international contests that have Jamaican participants, the minute he was struck out, I changed the channels. Yes, I have no interest in American or other countries' competitors, I am a proud and patriotic Jamaican.

But I am still angry because Gifton did not lose, the spell master got the pronunciation of the word: ERICETICOLOUS wrong. All along I heard (as Gifton did), a distinct 'O' sound in the first syllable of the word. Gifton recognising the word after being given its meaning, pronounced it the way he knows it phonetically, but when he asked for a repeat, the master kept on saying the word with the distinct American accent. Poor Gifton did not stand a chance.

The pronunciation thing is a problem. Americans, for the most part usually do not say words with the double 'tt', like we do. Hence, the words bottle or little come out sounding like boddle and 'liddle'!

Since we are not going to hear or say our words differently, I am suggesting to the powers that be that they hire an American spelling coach for the future Scripps entrant. Dr Archer might be good enough at preparing the childen to win the local leg of The Gleaner's Spelling Bee Competition but, sorry sir, you, like the children have a Jamaican accent. I don't mind the Ministry of Labour issuing a work permit for this purpose. And while we are at it, why not find one of the established spell masters who are already in the Scripps system? I am sure The Gleaner's coffers can cover this.

Anyway, congratulations to Gifton, I hope he gets a hero's welcome upon his return home and I hope he is included as an official and honoured guest at all Jamaica 50 celebrations.

Most of all, I hope the private and public sectors take care of all his expenses from now until he graduates from university. His parents should not have to worry about his education again ever. When we have a young boy who makes us proud, we ought to celebrate him in every way.