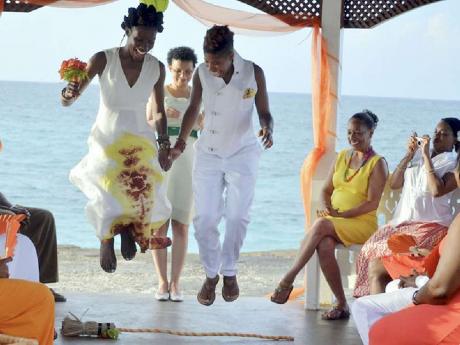 Nicole Dennis-Benn (left) and Dr Emma Benn jump the broom during their re-enacted wedding ceremony at Silver Sands in Duncans Trelawny on May 26. Looking on are close friends and family of the couple. - Contributed

An American couple who tied the knot on Jamaican shores last month has documented their experience getting married in a country whose laws have long been antagonistic to same-sex unions.

But, what took place at Silver Sands in Duncans, Trelawny, was just a re-enactment of the actual wedding which took place in Brooklyn, New York weeks earlier.

"All the paperwork was done here (in the United States). We know Jamaican laws do not support gay marriage, so we had all the legal matters settled before we came to Jamaica," Nicole Dennis-Benn, who made sure her name in the marriage was made clear, told The Gleaner from the US yesterday.

Dennis-Benn, who grew up in Jamaica, said she wanted to share the experience with her family and friends who could not make it to the US for the actual wedding.

The couple's loved ones were all open to the wedding, except for both their mothers who did not show up.

"Our mothers accepted the relationship, but they said they could not deal with the wedding part of it," Dennis-Benn said.

Their story, which captured the couple's "blissful" moment on the Jamaican north coast two Saturdays ago, has been documented under the heading 'Revolutionary Love by Nicole Y. Dennis-Benn' on her Internet blog.

The article gave a flattering description of the scenery at the venue where Nicole Dennis and her partner, Dr Emma Benn, a US native, dared the unthinkable on Jamaican shores.

Dennis-Benn, 30, grew up in Vineyard Town and left Jamaica for college after completing her studies at a prominent high school in Kingston. It was during her final years in high school that she acknowledged herself as a lesbian.

"I found out in fourth form. When I was coming out, I wondered, 'What the hell?' because I know I couldn't stay in Jamaica and be who I wanted to. I felt I was the only lesbian in Jamaica at the time and I grew up in a Christian home. I knew that most Jamaicans were Christian," she said.

But, despite what some might think, it was not homophobia that mostly fuelled her desire to move to the US, she told The Gleaner.

"It was for a lot of things, but mainly because of the classism. I grew up in Vineyard Town and when I went to (high school), I experienced real classism."

She left Jamaica for studies at Cornell University in New York City. Dennis-Benn, who has her master's degree in creative writing, met Benn while working at Columbia University. The two tied the knot on April 6 before coming to Jamaica to relive the moment a little over a month later.

In her blog, the career writer recalled the moment before the couple dared the unthinkable on Jamaican shores.

"My partner joins me in the water and for the next hour, we swim and mingled with our guests who have also been baked and rejuvenated by the sun. 'You ready?' my partner whispers, swimming up behind me to encircle her arms around my waist. 'Yeah, I'm ready.' We smile at each other, aware in that moment that we're about to do something big, bigger than us.

The Jamaican native shared that it was her partner who helped her rekindle her love affair with the island after living a refugee life for many years.

"In my vows, I mentioned that because of my
partner, I fell in love with my country again. For a long time, I ran
away from Jamaica, seeking refuge in the freedom that America offered.
However, when I met Emma, she was adamant about visiting Jamaica,"
Dennis-Benn said in her blog. 'Why not?' she asked when I turned her
down a few times. I couldn't tell her then how much I was hurt by the
culture, stifled by the seemingly robust structures of
colonialism.

"However, when Emma and I finally
returned to the island for our first visit as a couple in 2010,
something felt different. At the time, I couldn't place what it was.
There were no words to describe it since my brain had not yet processed
it. I felt beautiful, stronger, empowered."

She said
her acceptance of self was part of the reason she decided to have her
wedding in Jamaica. However, her decision was strongly criticised by
friends in America who claimed to know about Jamaica's anti-gay
culture.

"I had to reassure them that everything would be
fine, simultaneously trying to convince myself too. I would constantly
ask myself if I'm doing the right thing," she
wrote.

With that decision
out of the way, it now became an uphill task for the couple to find a
venue in Jamaica that would be accommodating to their
lifestyle.

"My partner and I took turns calling
resorts in Kingston, the south coast, and the north coast ... . We
clutched the receiver with sweaty palms as we prepared to come out as
lesbians over and over again. 'Yes, hello, we would like to inquire
about hosting our wedding at your hotel. What's the estimated cost for
space? Great! Just one more thing you need to know ... my partner is a
woman. Yes, that's what I said. A woman. Oh. OK. Uh-huh. I understand.
Thanks for your time'," read the blog.

Next stop was
at Villa where the two ended up saying "I do".

"I felt
like I'd emerged from a dark tunnel, greeted by her radiating light. My
father walked me down the aisle while my partner walked down the aisle
with her aunt. We walked together as a couple paired with the most
significant people in our lives to Whitney Houston's My Love is
Your Love, she said of her experience.