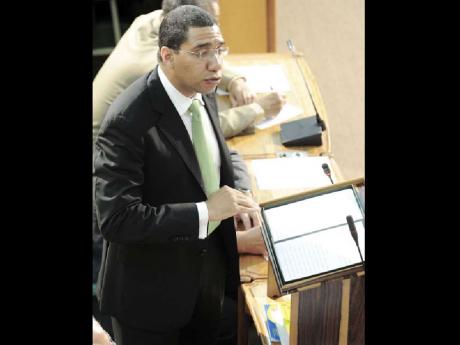 Andrew Holness making his contribution to the Budget Debate in Parliament last week with his tape recorder on the desk.- Norman Grindley/Chief Photographer

"You wrecked the economy and put us in this position," Prime Minister Portia Simpson Miller said last week.

She was responding to Opposition Leader Andrew Holness who, during his contribution to the 2012-2013 Budget Debate, was highly critical of the Government's tax package.

Simpson Miller became Holness' punching bag as he accused her and the other members of her party of playing the political poverty card in order to win state power last December.

Simpson Miller, cross talking Holness, promised: "I will deal with you next week." That day is almost here.

Tomorrow, Simpson Miller will make her contribution to the debate. She does so amid cries of broken promises by her administration, a heavy and confusing tax package, and an economy on the brink of tatters.

When she campaigned for power last year, Simpson Miller promised to restore hope to Jamaicans, reverse poverty, which nearly doubled under the four-year term of the Jamaica Labour Party government, and to put the economy on a growth path.

It would be at the very least, unrealistic, and at worse, stupid of anyone to expect that the Government would have turned around the fortunes of the Jamaican people in five months.

No blueprint for better life

But nonetheless, it is reasonable to say the Budget presented by the Government does not appear to be a blueprint to a better life. It restricts spending, thus suppressing aggregate demand, there is no discernible growth-inducement strategy, and the murderous tax package is a big syringe to pull money from the pockets of Jamaicans.

When Simpson Miller comes to speak to Jamaicans, she had better explain to us why the pronouncements of love and care for the poor were not manifested in this Budget.

She had better tell us whether she ignored the stark possibilities that the country was at the brink, and led Jamaicans to believe her election would mean milk and honey.

We hope the prime minister does not come to the country to merely list the missteps of the last Government and blame them for our predicament. She offered herself as the hope, and for many Jamaicans, that hope is quickly turning to despair.

At the heart of her presentation should be the many farmers she met on the campaign trail and told "hold on, help is on the way". Those farmers now have to pay GCT on agricultural inputs, making them even less competitive.

And she can't afford to leave out the many small business people who cannot claim GCT returns but will have to absorb a 65 per cent hike in the tax on their electricity bills. The prime minister must tell them whether this is the hope she promised.

The higgler, the carpenter, the housewife, the unemployed, the public sector worker, the public transport operator, they are all waiting for a positive message from Portia. She must show us the Promise Land.

When he spoke last week, Holness called the Budget 'poison', saying it was not the bitter medicine a government led by him would have administered to the ailing economy.

Holness said a lot last Thursday without saying much; and he followed it up on Friday at a press conference with much of the same. He talks a very good talk about a new politics, but his contribution on the Budget has given off more heat than light.

His presentation was replete with the tired rhetoric of playing on the fears of the Jamaican people. And to ensure that he has the sound bites whenever it becomes necessary, Holness made sure to carry his own dictaphone to Parliament and record himself.

Rightfully, Holness has blasted the Government for its tax package, but we are most disappointed that he had not one suggestion as to how to go forward. If that was not the bitter medicine, what would it be?

The Gavel found Holness' declaration that the tax package was not tax reform to be contrite. We believe the leader of the Opposition recognises that tax reform is a process which cannot be implemented in any one year.

Nonetheless, the strap must come out for Finance Minister Dr Peter Phillips, whose committee has failed to complete its work on the review of the Green Paper on tax reform. Phillips had said the intention was to table the White Paper at the time of the Budget so that it could be discussed at the same time. He must be angry at himself for not meeting that deadline, because many of the issues raised in the draft report of the committee have been incorporated into the Budget package.

We refer, in particular, to the tax on printed materials, including textbooks.

"We had taken the decision that (if) the exemption for printed materials would be removed, that we wanted to preserve one, specifically for books used in the schools," Phillips said as committee members perused the draft report on May 2.

To our understanding, the arrangement being entered into between the Ministry of Education and the Ministry of Finance represents the mechanism that was proposed by the tax committee, which includes Opposition member Karl Samuda.

We note where Holness, in attempting to capitalise on Simpson Miller's falling victim to her own words on the taxing of books, told the Parliament that his Government merely "flirted with the idea". That cannot be true.

How does an idea which is flirted with end up being announced in Parliament as a tax measure with an implementation date? The fact is that the Government in which Holness served as education minister imposed GCT on printed materials, to include textbooks, and repealed it after Simpson Miller led a wave of protest calling it a tax on literacy.

The Gavel has noted where Holness said it would cost $1 billion for Jamaica to change its head of state and to sign on to the Caribbean Court of Justice in its full jurisdiction.

We would like to know the basis on which he is putting forward such information. Until he gives us a credible source for the information, we will dismiss it as arrogant, ignorant Opposition-speak.

Like Holness, we are sick and tired of the politics of poverty and opportunism. Jamaica is at a critical juncture in its existence. The economy is in a rut and the fortunes of the people are being dashed.

In this 50th year of our Independence, the greatest gift the country can get is a new era of politics. We have practised, for too long, a brand of politics which is divisive, uncooperative, and destructive. Our forefathers' dream of a country with economic wealth for its people will only be fulfilled if Government and Opposition get serious about managing the affairs of the people and put aside partisan interest and the zest to win state power.