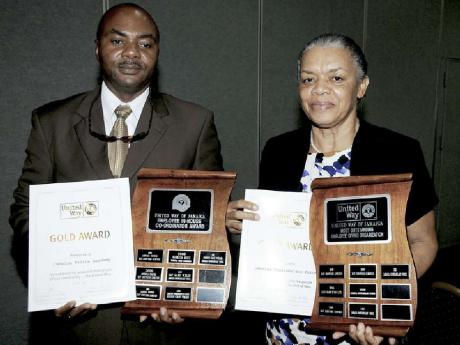 The Jamaica Constabulary Force (JCF) has been partnering with the United Way of Jamaica for more than 21 years to support the social, skills training and employment-generation programmes.

The United Way of Jamaica recently recognised the JCF during its Nation Builders Awards and Employee Awards ceremony held at The Jamaica Pegasus hotel. They received awards in various categories, including one of the gold awards for 75 to 100 per cent participation.

Superintendent Merrick Watson, commandant of the Jamaica Police Academy, who along with Deputy Commissioner of Police, Jevene Bent, collected the awards on behalf of the constabulary, said as law-enforcement officers in whatever way they can assist to prevent persons from committing crime in the first place they are willing to do
so.

"We want to pay more attention to prevention. We
contribute so that this organisation can assist individuals to make
better living for themselves and keep themselves out of trouble," Watson
said.

The JCF's contributions also assist persons who
are physically and mentally challenged, while reaching out to
communities which are difficult to police as a result of high
unemployment, large numbers of unattached youth, high teenage
pregnancies and illiteracy.

"We see our contribution
as our way of giving back to the society. In the business of law
enforcement, if we did not believe that we could make a difference, some
of us would not stay in it," Watson said.

The
contribution from JCF and other organisations have also benefited
programmes within the inner city in areas of skills training, early
childhood and youth development. With the support of funding from United
Way of Jamaica, Rise Life Management Services provides a child-friendly
and parenting space consisting of two renovated classrooms that can
house up to 100 children and 75 adults daily.

"We
believe that we have a responsibility as citizens of this country to
help this country to be all that it can be. We have to live here and we
have to create the conditions to ensure that we live a safe and
comfortable life," Watson added.