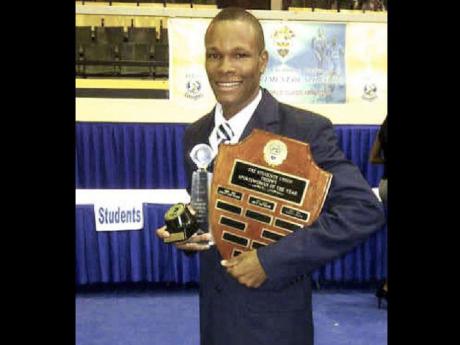 NICHOLAS DUSSARD will be watching his combined martial arts team member Kenneth Edwards' every move when the Jamaican takes the mat at London 2012.

Edwards is Jamaica's first-ever Olympic representative in taekwondo and Dussard is determined to follow in the footsteps of his countryman.

At 22, Dussard, a University of Technology (UTech) student, has numerous accolades to his name, including being recently appointed vice-captain for the Jamaica combined team's 2012 season, making him the youngest in the unit's 10-year history.

In celebration of his appointment and his team's quest to attain 50 consecutive unbeaten matches in honour of Jamaica's 50th year of Independence, Dussard has pledged to win all four of his International Taekwondo Federation (ITF) bouts in the United States this season.

So far, he has ticked off three victories: the Connecticut Taekwondo Champs in March, the Philadelphia Open and Saturday's CanAm Open, also in Philadelphia.

"I actually believe I will win all four," Dussard said recently. "The form I have been showing, I know how to win. That's the good thing. I am going for all four.

"I have consistently won in Philadelphia. There is one in June and another in September, the Queen's Open, which is the biggest of the four," he added.

Winner of the 2010 UTech Sportsman of the Year Award and the first Jamaican to win gold at the ITF Pan Am Games, Dussard is also poised to be the youngest captain of the team at the United States Open in July.

He follows decorated fighters, such as Arthur Barrows and Kenneth Edwards, as vice-captain to veteran Jason McKay.

Dussard's ascendancy could also see him at the helm of the team later this year in what it hopes will be its 50th consecutive unbeaten match.

Last year, the Wolmer's Boys' School graduate got the biggest international media exposure afforded a local martial artist when he fought live on ESPN and defeated Argentina's Estanislao Serrano at the International Sports Karate Association's 'Night of Champions' at the US Open in Orlando, Florida.

He was crowned world lightweight continuous
sparring champion on the tournament's biggest stage, which was beamed
live to a worldwide audience.

The Jamaica combined
martial arts team star had previously won US Open titles throughout his
career, but reached the pinnacle at the tournament by being selected for
the Night of Champions battle.

"I have three medals from the US Open, but this
is my first ISKA medal," he explained. "It's a higher standard than the
US Open - it's a bigger stage.

"It was harder than I
thought it would have been. I've fought Serrano before, but he came out
firm and very hard. We both went at it early and it called for something
extra," he said of his historic victory.

Groomed by
the combined martial arts team since he was 12 years old, Dussard has
also won four consecutive world titles in team
fighting.