'Finally, we did it' - Cavalier rejoice over return to Premier League 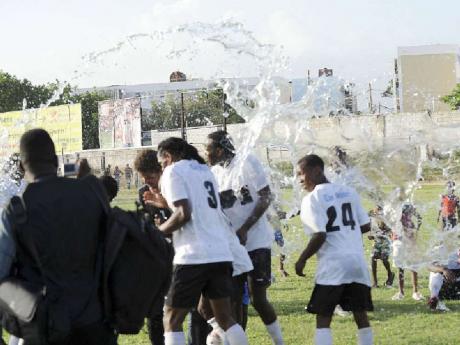 Members of the Cavalier team are doused with water as they celebrate their qualification to the Red Stripe Premier League, following yesterday's 2-0 win over Manchester's New Green, in the Jamaica Football Federation Confed play-offs, at Boys' Town's playing field on Collie Smith Drive. - Ian Allen/Photographer

Kingston and St Andrew Football Association (KSAFA) club Cavalier and Western Confederation's Savannah of Westmoreland will next season ply their trade in the Red Stripe Premier League, after recording 2-0 and 1-0 wins, respectively, in the fourth round of the Jamaica Football Federation Confed play-off series.

Cavalier, who entered the round with maximum nine points from three matches, were sent through at Collie Smith Drive courtesy of a 25th-minute strike from Troyland Williams, and a 78th-minute solo effort from national youth representative, Chevanne Marsh, in their game against South Central Confederation champions, New Green of Manchester.

Savannah, who began the round in second position, booked their ticket at Drax Hall thanks to an 83rd-minute goal from Rohan Young, which gave them a 1-0 win over Eastern Confed champions Volvo United of St Ann.

It is the first time in 18 years that Cavalier will be playing in the country's top flight, while Savannah are qualifying for the Premier League for the first time.

"Finally ... we did it," said Cavalier's coach, David Laylor, who along with players and other team officials celebrated following the final whistle.

"This has been in the making, and after missing out for the past two season it's good to know that we pulled it off. The feeling cannot be explained," added Laylor, who played for Cavalier when they were a leading team in the Premier League and coached by the late Leighton Duncan.

New Green, who began the day at the bottom of the standings and needed to win to keep their hopes alive, were put on the back foot when Williams, showing good dribbling speed, got past two defenders then fired past the otherwise impressive goalkeeper, Levar Williams.

New Green tried their best to step up the tempo, but with Cavalier not relenting, they were forced to keep back tracking.

Marsh, who was a standout for Calabar High earlier this season in the Manning Cup, made the game safe when after picking up a ball outside the penalty area, he showed good dribbling skills to get past a defender and Williams, before calmly slotting home.

New Green midfielder Tyrone Chambers was sent off in the 89th minute for violent conduct, after pushing referee Lewin Purser.

New Green's coach, André Swaby, team officials and players all refused to speak to the media after the game.