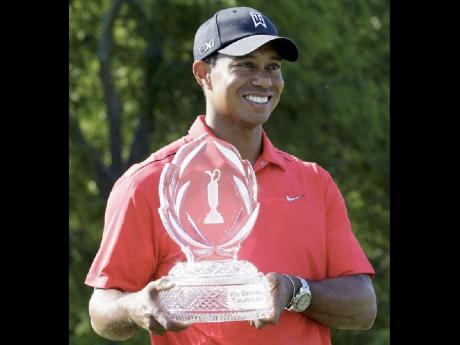 Tiger Woods holds up the trophy after winning the Memorial golf tournament at the Muirfield Village Golf Club in Dublin, Ohio, yesterday. Woods finished at 9-under par. - AP

Tiger Woods was at his best yesterday at the Memorial. He hit nearly every shot just the way he wanted, worked the gallery into a frenzy with one last charge over the final hour and left everyone buzzing - especially Jack Nicklaus - with a shot they will talk about for years.

Better yet was the timing of his 73rd win.

Woods tied Nicklaus for career PGA Tour victories at the tournament that Jack built. And the 14-time major champion suddenly looks equipped to resume his chase of another Nicklaus mark that is more significant - 18 major championships.

The US Open starts in 11 days.

With a chip-in that even Woods called one of the toughest shots he ever made, he birdied three of his last four holes to close with a 5-under 67 and turn a two-shot deficit into a two-shot victory over Rory Sabbatini and fast-closing Andres Romero.

Coming off a two-putt birdie on the 15th, Woods hit 8-iron over the green at the par-3 16th and into an impossible lie. It was buried in deep rough, the pin 50 feet away along a ridge. Woods hit a full-flop shot, hopeful to give himself a reasonable putt for par. Far more likely was the ball going short and down a slope away from the pin, or coming out too strong and rolling into the water.

No one was thinking birdie, not even Woods, until he took two steps and delivered an uppercut when the ball fell in the right side of the cup.

Nicklaus was gushing from the broadcast booth.

"The most unbelievable, gutsy shot I've ever seen," he said.

Woods, who finished at 9-under 279, won the Memorial for the fifth time. At age 36, he is 10 years younger than Nicklaus when the Golden Bear won his 73rd tournament at the 1986 Masters. Sam Snead holds the PGA Tour record with 82 wins.

"I had to take a cut at it because the lie wasn't as great," Woods said. "I went for it. I pulled it off. And for it to land as soft as it did was kind of a surprise, because it was baked out and it was also running away from me. It just fell in. I didn't think it was going to get there at one point."