US stocks waver as calm returns to market 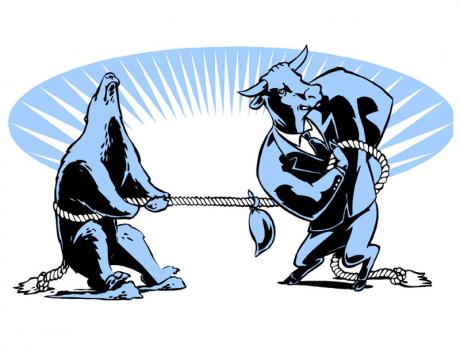 Calm returned to the stock market Monday after a spasm of fearful selling last week. Major indexes were mixed in afternoon trading after being down for most of the day.

The Dow Jones industrial average opened at its lowest level since December after a 275-point sell-off on Friday ignited by grim economic signals, especially a dismal report on the United States (US) labour market.

Randy Frederick, managing director of active trading and derivatives at the brokerage Charles Schwab, expects trading to remain slow and steady unless traders are moved by positive news, like a surprisingly strong economic report, or fresh fears about Europe's financial stability.

"When the market goes sideways like this, volume tends to trickle off," Frederick said. "You've got to find a catalyst for people to enter the market, and frankly, I just don't see one right now."

The price of the 10-year US Treasury note fell, lifting its yield to 1.53 per cent. The yield hit a record low of 1.44 per cent on Friday as fears of a global slowdown increased demand for safe investments.

Among the 10 industry groups in the S&P 500, only three fell: Materials companies, whose revenue get pinched by falling commodity prices; industrials, hit by fears of a global economic slowdown; and financial stocks, which would likely bear the brunt of any worsening of the instability in Europe.

Caterpillar, which exports heavy machinery, fell 2 per cent on fears that slower building in China and Europe will lead to fewer orders for construction equipment. Most of the other big losers in the Dow average offer global financial services: JPMorgan Chase, General Electric and Bank of America.

Chesapeake Energy, the second-biggest US natural gas producer, rose 6 per cent, the most in the S&P 500. The company said it will replace four board members, bowing to pressure from activist shareholder Carl Icahn.

Homebuilders had some of the biggest declines in the S&P 500. PulteGroup lost 5 per cent, Lennar and D. R. Horton 4 per cent. All three companies more than doubled their steep losses from Friday. In two days, they have lost about one-third of the huge gains that they posted in the first three months of the year.