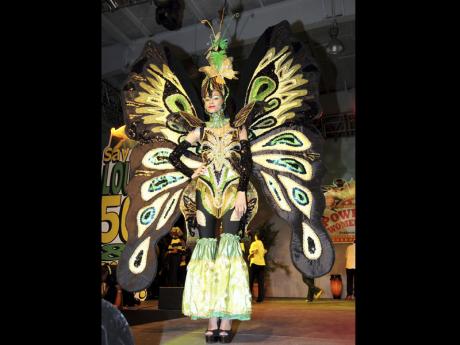 Powerful Women and Men Perform for Charity showcased its own costume queen. The lovely butterfly also had Jamaica50 in the back in celebration of the country's jubilee.-Winston Sill/Freelance Photographer

Powerful showing for women and men performing for charity

A celebratory atmosphere brought an end to a night where Jamaica's 50 years of independence was highlighted at Powerful Women and Men Perform For Charity at the National Indoor Sports Centre on Sunday evening.

Throughout the show reference was made to aspects of Jamaican culture, but towards the end came the grand celebrations.

Six Pak, a group that included persons like Linroy Edwards, Ian Wilkinson, Michael Powell, Emerson Henry, Sabba Tooth and Sill Bell, did numerous festival songs from previous years. As the songs were being done, two dancing men on stilts took to the floor, one with a golden '50' in his hand. Shortly after, the organisers, who were dressed in the national colours, joined them to hand out balloons and small Jamaican flags to patrons.

Also joining in the festivities was a costume queen, who wore a beautiful butterfly-inspired costume that reflected everything Jamaican. She was later flanked by two nicely toned men, who were dressed in gold trunks, showing off their chiselled bodies.

But that was just one of many things on the night that celebrated the country's independence. The show kicked off with the powerful Jamaican folk Singers, who were followed by Winston De La Haye on congo drums. The confession by Glynis Salmon brought some laughter to the event as she spoke about her 12 years of being part of the show.

Georgia Henry, equipped with an afro wig and backup singers, did a medley with My Boy Lollipop and Shanty Town.

With some fancy foot movements, Maurice Henry got some cheers out of the audience shortly after getting on stage, but his rendition of a ska song was not so impressive.

There was also an excerpt from Aston Cooke's Jamaica 2 Rhatid. Although there were some problems with some of the microphones, the audience thoroughly enjoyed the 'road blak' scene. Accompanied by Stella Maris dancers, Michael Powell made an impact with a rendition of Jimmy Cliff's Many Rivers To Cross before a rocksteady medley by Robbie Robinson.

As in previous years, Carol Francis was a hit with her dance routine. With young Dance Xpressions members, she started with ska then glided into reggae before taking on dancehall moves like 'Bogle', 'World Dance' and 'Wacky Dip'. But the biggest uproar came when she danced to Konshens' Gal A Bubble and even went head over heels and did a half split.

Ian Wilkinson followed with a deejay medley with songs from Shabba Ranks, Yellowman and Beenie Man, but he was more for comic relief. Adding more comedy was Cordel Green, who did a dramatisation that had patrons laughing from beginning to end as he joked about current affairs. Richard Taylor closed out the segment with a gospel song.

After the intermission, the second half of the show was started by a fashion show that had Afrocentric designs from Indigo Soul Caftans by Paula Hurlock. Afterwards, there was 'European Attitudes' that had outfits from Angela's. But the 'Pride of Jamaica' had popular figures wearing outfits that had the colours of the Jamaican flag. Some of the persons who strutted were Lime's Grace Silvera, designers Keneea Linton-George and Bill Edwards, Miss Jamaica World 2011, Danielle Crosskill, Nadine Sutherland, Prodigal Son and former fashion model Althea Laing.

Later, singer Ossie D was energetic and entertaining as he gave a dance lesson, even doing dance moves like 'Cowfoot'. Meanwhile, Franz Clarke was on top of some of the latest slangs like 'tun up' and 'deh so nice', as he did a 'reader man' skit. Dimario McDowell also did some decent impersonations of Dennis Brown and Gregory Isaacs.

Dr Michael Abrahams had patrons laughing uncontrollably, especially when he said: "When I look at a woman nowadays I don't know if I should thank God or technology." He continued to lament about the number of fake things women wear, before going into a piece called Nowadays Woman.