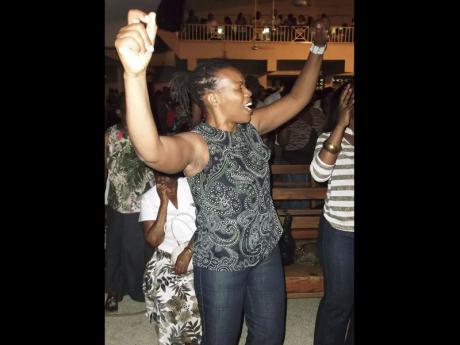 This woman could not help but be moved during Kevin Downswell's performance.-Photo by Chad Bryan 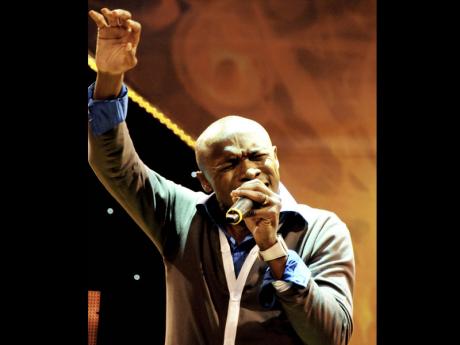 Shouts of praises and the lifting up of the name of Jesus Christ emanated from worshippers and other gospel artistes at the Eastwood Park Road New Testament Church of God on Friday. Fans, well-wishers, members of the media and other individuals gathered to support international gospel artiste Kevin Downswell at the launch of his second album - The Search Continues.

The atmosphere of worship was set when the Perpetual Praise team graced the stage with their performance singing soul-stirring songs such as He is Able, Awesome and Draw Me Close.

However, it was the 2003 Jamaica Cultural Development Commission (JCDC) gospel winner, Kevin Downswell, who had the crowd on the edge of their seats. That anticipation was heightened when a video of him was beamed on a projector screen at the venue. As he took to the stage and began singing songs from his latest album, including his latest hit If It's Not You, the worshippers leapt to their feet and began singing in unison.

It was evident from his performance that he had grown spiritually as well as vocally since his first album. According to Downswell, "This takes my ministry to the next level."

"My new album has 18 tracks, five of which are collaborations with fellow artistes like Papa San, Prodigal (Son), Ryan Mark, and it is also a great improvement in production quality over the first one," Downswell added.

During the LIME-sponsored event, which was hosted by Andrew Lawrence and DJ Dia from LUV 3:16 in the United Kingdom, giveaways in the form of bags, pens, cellphones and a few other niceties could be had. The event came to a close with Downswell being joined on stage by acts such as dancehall, reggae gospel, hip-hop artiste Sean Lypher and Ryan Mark.