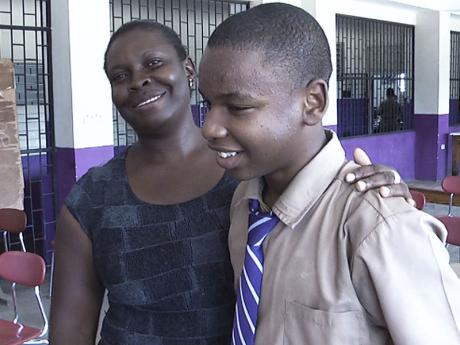 Kingston College (KC) students strained to get a peek at their newest star, Gifton Wright.

Gifton, the soft-spoken Gleaner Children's Own Spelling Bee champion for 2012, commanded attention yesterday, his first day back at school after ending tied for fourth at the Scripps National Spelling Bee in Maryland last Thursday.

"This feels really great to be back at school because I missed it," he said.

Gifton was aware many Jamaicans were cheering for him.

"I am extremely proud to be a Jamaican. There are about 250 Americans entering and some other countries. So to be from a small country like Jamaica, representing us and placing so far is a really great experience for me."

Gifton said he could feel the love on his return on Saturday night and thanked all who came to greet him.

As he spoke to The Gleaner, more boys joined the gathering, excited to see their schoolmate up close, days after being in the international spotlight. Shakazani Karenga, Gifton's form teacher since grade seven, described him as an excellent student.

"He's very laid back, but quite active in class. He's one of the top performers in the class. He's not just a speller."

He noted that though Gifton was reserved, he is sociable and relates well with his peers. KC is known for producing champions in all fields and Gifton is the first spelling bee champ from the school. Just don't expect him to brag, he's just too humble. Already blushing, he really became red-faced as his mother, Marie Wright, gushed about how he made everyone proud. In his Tawes Meadows community in Spanish Town, he is now a local hero.

"Everybody sees him and says 'there goes the champion'. People look and say 'this boy is going to go far'!" she said. Gifton revealed that the word he stumbled on was the only word he got that he didn't know and admitted the pronunciation threw him off.

"I kept asking questions trying to find the clues but it never helped. It was a really hard feeling (to drop out) but, it happens," he reasoned.

His spelling competition days are over because he cannot compete past eighth grade or age 14. But he has taken to the inter-form quiz and Gifton said he would join the revered Schools' Challenge Quiz programme. Ultimately he said he wants to be a doctor.