Shooting The Breeze In Norris 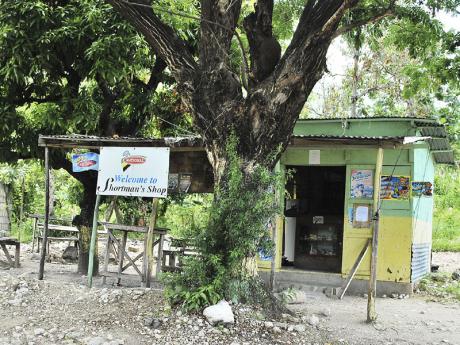 The outside of Shortman's shop. 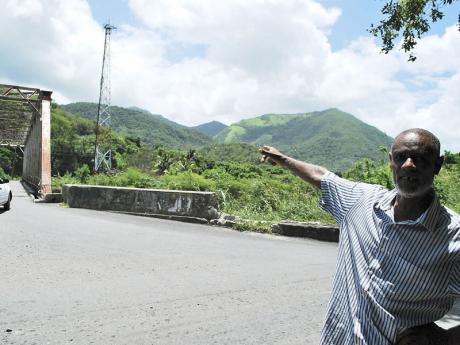 Alcott points to the Easington bridge in St Thomas 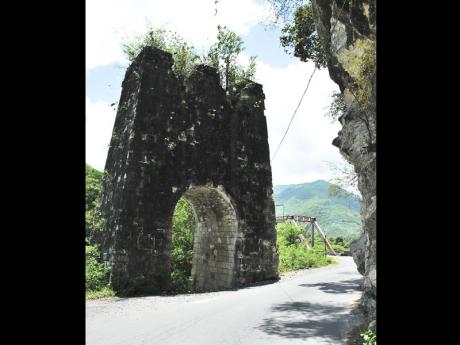 One of two huge concrete columns to which the old rope bridge was once attached. - Photos by Robert Lalah
1
2
3

He was a bit of a close talker. That is to say, he insisted on standing less than an arm's length away from me as we chatted. This created a predicament for me. I tend to prefer a little more space. Whenever I took a casual step back, he would follow. I eventually gave up the fight altogether and just stood on that roadway near the Easington bridge in St Thomas with this fellow not 12 inches from me.

His name is Alcott and he lives in a community called Norris. I had spent the morning in Norris shooting the breeze with a fellow named 'Shortman'. But Shortman didn't have much to say, so I left his small roadside shop and was standing near the Easington bridge when Alcott walked over.

"Good morning!" he said. I returned the greeting and asked him how he was doing.

"I worship in Yallahs," he said.

I paused, wondering if I had missed something.

Alcott saw me looking up at the bridge. "That bridge build in 1944," he said. "My grandmother tell me about it and she born 1912. Is a tragedy what really lead dem to build it still," he said, shaking his head.

Sometime during the 1930s, a donkey carrying the weight of hampers full of produce was making the trek across the bridge. A sudden gust of wind rocked the bridge back and forth, toppling the donkey and sent it into the murky river below.

It's an incident that greatly traumatised the people of Norris. Apparently, the donkey was quite popular.

"We really sorry seh di donkey die still, but at least now we have big bridge what no breeze not going to blow down," said Alcott.

There were some trucks and tractors moving about in the bed of the river, some distance away. I asked Alcott what was going on.

"Is di mining. You have a quarry up the road and you know St Thomas into a whole heap of mining, so more time you come to Norris you see nuff tractor at work. If you come and nuh see likkle of dat den something wrong," he said.

A short man with a pronounced limp and curly hair was crossing the bridge, heading our way. When he was close, he called out to Alcott.

Alcott responded with a wave of the hand.

Alcott didn't respond. Instead, he looked at me and rolled his eyes. The man with the limp walked off.

"Cho! Mi glad him gawn," said Alcott. "All di while him come wid him talking talking. Too much baddaration dat now."

I asked Alcott if he enjoyed living in Norris.

I was surprised by the enthusiasm.

"Norris nice, man. Mi wouldn't live nowhere else," he said. "Like how now mi can walk road and nuh have to worry about nothing, is so mi like fi live. When mi done now mi go back home and eat mi dinner and relax. Is so mi like live. Is so alone life nice," said Alcott.