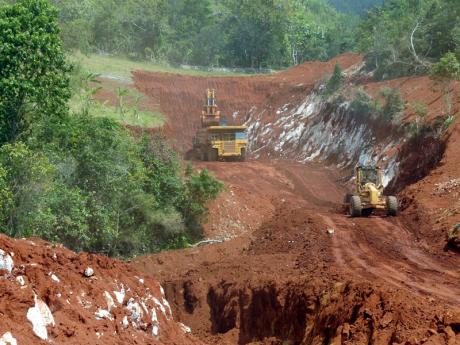 A truck being loaded with bauxite. File

ALTHOUGH I have written about the Jamaican bauxite and aluminium industry in three books and numerous articles, I think it is appropriate to repeat some of what I have written to mark the 60th anniversary of the beginning of the commercial mining of the ore.

On June 5, 1952, the first shipment was made by Reynolds Jamaica Mines from its port in Ocho Rios to the parent company's alumina plant at Hurricane Creek, Arkansas.

The Daily Gleaner 'jumped the gun', so to speak, by announcing the impending shipment in the next day or two in its issue of May 28, 1952, with a front page headline: 'Red Gold Going for the First Time'.

This first shipment was to mark the start of Jamaica's largest non-service local industry for all but a few of these 60 years.

It was the culmination of a more-than-decade long process of:

(a) Discovery of the existence of large quantities of commercial reserves in the country;

(b) Contemplated use by the allies during the Second World War;

(c) Competition for control over the reserves; and

(d) Research and development activities to enable the economic processing of the ore.

Although the famous geologist, Sir Thomas de la Beche noted the existence of the red marly soil in 1827, and, later, another geologist, C. Barrington Browne, wrote of the red ferruginous (iron-containing) earth, no connection was made between these two observations with the earlier discovery of a naturally-occurring aluminous material, near the village of Les Baux, (hence the naming of the aluminous ore 'bauxite') Provence, France, by the French chemist, Pierre Berthier, in 1821.

Two pertinent developments in the late part of the 19th century were to make these naturally occurring aluminous materials (even if in Jamaica's case they were more recognised for their iron content) important.

The first was the almost simultaneous discovery in 1886 (on the much grander scale, not dissimilar to the separate inventions of the calculus by the 17th century titans, Newton and Leibnitz, of the process of 'winning' aluminium from its oxide by electrolytic means. These inventions were by an American, Charles Martin Hall (who had some Jamaican connection, by virtue of his father serving as a congregational minister in the parish of St Mary for 10 years and returning to the United States just before his son was born), and the Frenchman, Paul Louis Heroult.

The second was two inventions, one in 1888 and another in 1894, respectively, of a process for extracting alumina from bauxite by the Austrian Chemist, Karl Josef Bayer. And so the technology was named the 'Bayer' process after him.

But it was not until about a-half-a-century after these two discoveries that there was an 'awakening' of the commercial possibilities of the Jamaican red, marly soil or ferruginous earth.

This awakening had its genesis in the difficulties experienced by a wealthy gentleman farmer and businessman, Sir Alfred D'Costa, who was having difficulty growing Wynne grass (Melinis minutoflora) for his cattle on his lands in St Ann.

As the saying goes, one thing led to another with the determination by the Government of Jamaica's Agricultural Chemistry Department, supported by chemical analysis overseas, that the soils, while devoid of essential nutrients for plant growth, had relatively high concentrations of aluminium.

As mentioned above, Sir Alfred was not only a gentleman farmer, but a businessman. So, wearing the latter hat, he sought to interest first the British Empire's companies, Alcan and British Aluminium in the commercial potential of the ore on his land, and when he found that neither company was interested in sprinting on this matter, he turned to the Dutch Company, Billiton, through whose government he had a connection by virtue of being its Honorary Consul in Jamaica.

In the event, the matter became not merely a case of 'parson christening his pickney first', but 'parson christening only his pickney' as the 'Empire Company,' Alcan, was given a monopoly over of the exploration of the ore. But, as we shall see later, the Second World War and its aftermath, were to usher in the era of Pax Americana and see the United States (US) emerge as the predominant power in world affairs.

Aluminium became an important material of war during the First World War and became much more so during the Second World War, particularly with the increasing role of aircraft as a weapon of war.

So, disrupting the supply chain of this material (as well as others of course) whether in the raw or finished state became of strategic significance to the combatants.

This was precisely what the Germans sought to do in the Atlantic in respect of bauxite shipped from British Guiana(now Guyana) and Dutch Guiana (now Suriname),where bauxite had been mined from the early decades of the last century, to the North American mainland.

The Germans, through their submarines (called U-boats), destroyed and harassed allied shipping in the Atlantic.

The matter was of such concern, that no less a person than the American military supremo himself, General George Marshall, was moved to write the Commander-in-Chief, United States Fleet, Admiral Ernest J. King, as follows:

...The losses by submarines off our Atlantic seaboard and in the Caribbean now threaten our entire war effort ... Of the 74 ships allocated to the army by the War Shipping Administration, 17 have already been sunk. Twenty-two per cent of the bauxite fleet has already been destroyed. ...We are all aware of the limited number of escort craft available, but has every conceivable means been brought to bear on the situation?

One such means contemplated was shipping bauxite from Jamaica, which was 1,000 miles closer to the North American mainland than the Guianas and would therefore reduce the risk of U-boat destruction or harassment.

However, this option was not pursued, most likely because of the 'turning of the tide' of the war in favour of the allies, and the difficulty of economically processing the Jamaican ore with the then- known 'American' Bayer technology.

Two notable developments led to the emergence of two US companies, Reynolds Metals and Kaiser Aluminium, to join Alcan in developing the Jamaican industry.

Carlton Davis is ambassador and special envoy in the Office of the Prime Minister. Please see Part 2 tomorrow.