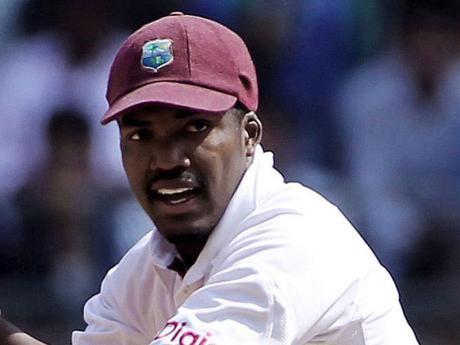 LEICESTER, England:West Indies batsman Darren Bravo said he was working hard to eliminate some of the missteps that have dogged him and finish the three-Test series against England strongly.

This followed a typically flambuoyant 66 against Leicestershire on the first day of the Windies' two-day tour match on Saturday at Grace Road.

"It was very important for me to spend some time in the middle," he said. "I was happy with my performance, but disappointed with the way it ended.

"I have been working hard in the nets, trying to get my foot closer to the ball more and I feel I executed it really nicely (in this innings) and hopefully I can continue from here."

He added: "I think I have gotten used to the conditions more. But it's now a matter of me capitalising on the starts that I get.

"I got a few starts in the two Tests, but I wasn't able to carry on. We have one more Test to play, so hopefully I can make use of whatever start I get and end the series on a high."

Bravo and compatriot Adrian Barath added 111 for the third wicket to rescue West Indies from early strife against Leicestershire.

Barath was unbeaten on 53 when bad light stopped play and both batsmen looked in fine touch.

Bravo felt it was an encouraging sign that the Windies top order could overcome their struggles in the Tests against England, although opener Kieran Powell and vice-captain Kirk Edwards fell cheaply.

"The top of the innings has been giving us some problems and I thought Barath and I played really well," said Bravo. "We were communicating really nicely with each other and helped out each other, which was very important. It was nice to see Adrian capitalise on a good start and hopefully he could carry on."

He said: "Most of us are not accustomed to these conditions, but it is very important for us to believe in ourselves and our ability. Hopefully, we can learn from our mistakes and improve as quickly as possible - and I believe we are learning each and every single day and I am sure we will come good.

"We are a bit inexperienced at the top, but thankfully we have the likes of Marlon Samuels and Shivnarine Chanderpaul to hold things up in the middle, when things don't go according to plan at the top, so it is just us sticking together as a team, helping each other out, and I am sure we will benefit from it in the long run."

The tour match is a prelude to the third and final Test against England, starting this Thursday at Edgbaston in Birmingham.