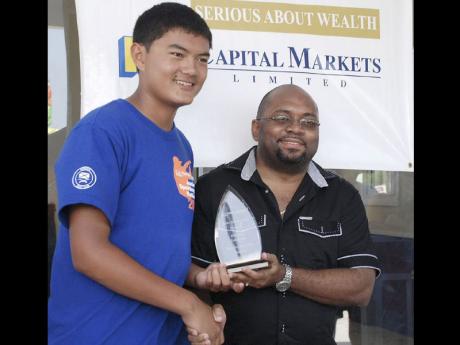 Nicholas Chen is presented with his trophy for winning the NCB Capital Markets Junior Sporting Clays Nationals from Vernon James, vice-president, sales and client services at NCB Capital Markets Ltd. The tournament was held on Sunday at the Jamaica Skeet Club in Portmore. 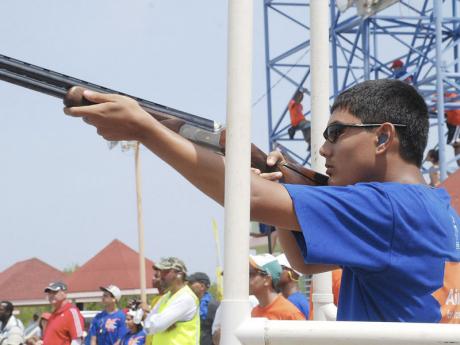 Youngster Nicholas Chen continues to impress as he shot 95 out of 100 targets on his way to cop the Junior Class title (14-16), at the NCB Capital Markets Junior Sporting Clays Nationals, at the Jamaica Skeet Club in Portmore, St Catherine on Sunday.

Chen finished ahead of Branoon Heitman (90) and Zachary Harris (89).

"I'm proud of myself," said Chen. "I'm very surprised at the score, 95 is actually an excellent score."

He added: "I just stayed focused on all the birds (targets) today and it paid off."

The super final, or super six, is contested between the top-six shooters of the day.

In other results, Brandon Reid shot 82 to win the sub-juniors class over Andrew Azan, who also shot 82. However, Reid won in a shoot-off.

Twelve-year-old, Richard Lechler, shot a record 82 of 100 targets to capture the 10-12 class. He was followed by nine-year-old Zach Lazarus, who shot an impressive 79, while, Nickolai Clarke scored 76 to place third.

Khalil Azan, resident coach at the Jamaica Skeet Club, was pleased with the overall performance and standard of the junior shooters. He thought they did better than last year, the course was more challenging and the scores were better on the whole.

"Today was a special day in Jamaica's history," Azan said. "We had over 60 juniors competing from as young as age nine to a class of 17-19 year olds.

"The course is much more difficult, but the scores on average is higher than last year," he admitted.

"As a coach, If you look at the overall scores, the most impressive group was the 10-12. Richard Lechler set a record score of 82, Zach Lazarus, 79, and third place Nickolai Clarke scored 76. All those scores were record scores," he declared.

"The 82 was equivalent to the class above the sub-junior class (13 year-olds)."