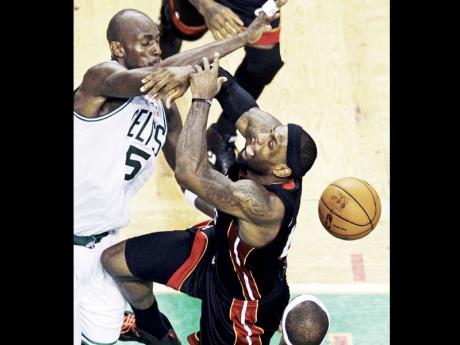 BOSTON (AP):He's taken last-second shots and he's passed them up. He's made some and missed a few, too.

Here's something LeBron James had never done in the final seconds of an NBA playoff game before, though: Watch from the bench after fouling out, with nothing to do but hope that a teammate can sink the winning shot.

"'I'd rather be on the floor,'' James said after fouling out in overtime of Game Four of the Eastern Conference finals and watching the Boston Celtics beat the Heat 93-91 on Sunday night to send the series back to Miami tied at two games apiece.

''I don't foul out,'' said James, whose sixth foul was an offensive foul underneath the Miami basket. ''If I'm going to foul out, that sixth foul, I wish I would have earned it and it had actually been a foul on me. Whatever.''

first time at the worst time

James fouled out with 1:51 left in overtime, about 2 1/2 minutes after Paul Pierce went to the bench with six fouls.

''It was like chess: They took our queen and we took their queen,'' Celtics guard Ray Allen said. ''I don't ever think I've seen that before. But (Rajon) Rondo's on the floor; I'm on the floor; Kevin (Garnett) is on the floor; (Dwyane) Wade's on the floor. All that has to happen at that point is the game has to be won. We don't care what it looks like. We had plenty.''

With each team missing its leading scorer, the Celtics outscored Miami 4-2 in the overtime, taking the lead on a Rondo runner and holding on with a pair of free throws. After blowing a chance to win it in regulation when James passed to Udonis Haslem for an air ball at the buzzer, Miami worked the ball to Wade for a clean three-pointer that bounced off the rim at the end of overtime.

James had a good view.

But all he could do was watch.

''Looked good and it was straight on,'' he said. ''We ran through all the options. I could tell we were going for the win. Without Chris or myself, he probably looked around and had to go back to himself.''

James picked up his fifth foul with about six minutes left in the fourth quarter - a double foul with Kevin Garnett. James' night ended when he was called for an offensive foul with Mickael Pietrus guarding him.

Miami did not score again.

''It was very frustrating'' to foul out, Pierce said. ''But it's gratifying when you see the other star player fouling out also.

''You rarely see that, when you've got to start players fouling out,'' he said. ''It was a cut, scratch, grab, hold, elbow type of game. Nobody was going to give an edge.''