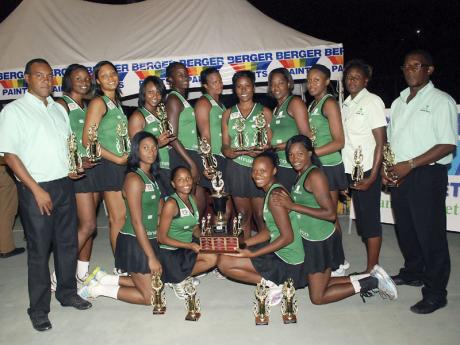 WINSTON NEVERS, coach of Jamalco, believes that his team's discipline in playing according to plan was crucial in their Jamaica Netball Association (JNA) Berger Paints Super League title success.

Jamalco, the defending champions, put on a scintillating second-half display to record their second consecutive lien on the title, after a nail-biting 44-43 victory over Tivoli Gardens in game two of the finals on Saturday night at the Leila Robinson Courts.

"It was a very tough series for us because my players had to fight very hard to win this title," said Nevers.

"We played to our game plan and the girls followed the instructions and I must lift my hat to them because they executed well throughout the match," Nevers added.

Jamalco, who were winning their ninth overall title in the past 10 years, won the best-of-three finals 2-0.

The first half was exciting and very competitive as both teams entertained the crowd with top-class netball, which resulted in the scores being tied 22-22 at half-time.

The capacity crowd were also well entertained in the third stanza, as the teams traded basket-for-basket, with Jamalco clinging to a one-point lead (34-33) at the end of the period.

However, Jamalco came out firing on all cylinders in the third quarter and quickly opened a five-point lead, courtesy of former national goal shooter Elaine Davis, who sunk four straight points to move her team into a 38-33 lead with less than four minutes remaining.

However, Tivoli fought their way back into the match as they managed to capitalise on a number of sloppy plays from Jamalco's players to cut the deficit to 44-43 with 30-seconds remaining.

Tivoli had a chance to send the game into extra time on the final possession, but one of their players made a crucial turnover to hand Jamalco the victory.

David led the way for Jamalco with 37 goals from 43 attempts and received support from Marsha Murphy, who sunk seven goals from 12 tries.

National players Sabrina Spence, with 30 goals from 33 attempts and Jodi-Ann Ffrench, with 13 goals from 20 tries, were the main scorers for Tivoli.

Sylvester Campbell, the west Kingston team's coach, said: "It was a good game from both teams, but just at the last minute, we thought that we would have had that golden minute, but it did not happen for us."

He added: "We did have a chance to tie the game up, but we made a turnover and that cost us the game."