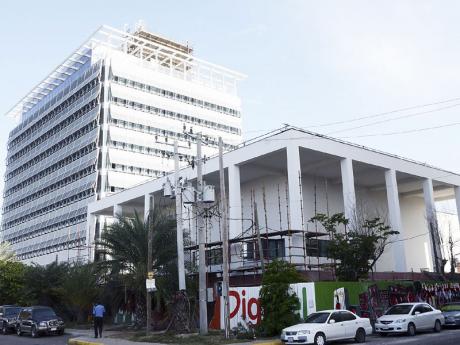 The new Digicel building on the Kingston waterfront, to be the home of Digicel Group and Digicel Jamaica.-Rudolph Brown/Photographer

Mobile company Digicel Group Limited said Tuesday that it grew operating profit by 13 per cent to US$1.08 billion, supported by its growth in subscribers, at financial yearend March 2012.

The group declined to reveal its net earnings after factoring expenses including interest, taxation, depreciation and amortisation, or EBITDA.

Revenues for Digicel Group, which comprises 30 markets in the Caribbean, Central America and the Pacific, increased 14 per cent to US$2.54 billion and its subscriber base rose 27 per cent to 12.8 million.

"The results announced today reflect the continued growth and development of Digicel in the Caribbean, Central America and Asia Pacific," said Denis O'Brien, chairman and founder of Digicel Group, via press release, at Tuesday's disclosure.

Jamaica, however, is still said to be its most lucrative market in terms of operating profit. Jamaica and Haiti together reportedly generate some 40 per cent of Digicel's cash flows.

"The success of Digicel is due to the commitment of a very strong management team and workforce whose sole focus is on the highest standards of service delivery in all markets," O'Brien said.

Rating agency Fitch last week stated that Digicel's total debt was 4.5 times its EBITDA and could grow; but Fitch also said that the celco's wider debt-to-asset ratio, or leverage, should wane from its current 'high' position.

Debt has been O'Brien's preferred means of financing expansion of his business. The Fitch report indicated that the Digicel companies were sporting total debt of US$4.5 billion at December 2011, but should approximate to US$5 billion, considering the extension and amendment of a facility a month later in January and the placement of a bond in February.

"Leverage at DGL remains high but expected to gradually decline in the medium term, as EBITDA grows and indebtedness remains relatively stable. As of December 31, 2011 and last 12 months EBITDA, total debt to EBITDA was 4.5 times and net debt to last 12 months EBITDA was 4.1 times," said Fitch in its report on Digicel which concluded by maintaining a stable B rating for the mobile operator.

Digicel advised that up to March its value added services and data revenues were up 47 per cent and now account for 20 per cent of overall service revenues. This growth was supported, in part by Digicel's 4G mobile offering, which is now available in 14 markets across the globe - with further rollouts planned - and by the rise in smartphone usage.

Group revenue grew by 28 per cent.

Digicel's balance sheet and liquidity position has continued to improve with cash reserves of more than US$657 million.

"Digicel has closed out another strong year in which, for the first time in our 11 year history, our annual EBITDA was over US$1 billion," said group CEO, Colm Delves.

Last year, the celco reported made US$954 million in operating profit.

"With 12.8 million subscribers across 30 markets, Digicel has delivered 14 per cent revenue growth, placing us at the leading edge of performance amongst telecoms operators worldwide," Delves said.

Digicel's annual highlights include the acquisition of rival Voila in Haiti, the completion of the acquisition and integration of Claro in Jamaica, and the launch of the US$16 million 'fibralink' extension project to connect Haiti to other countries and open it up to broadband services starting July.

Digicel has invested more than US$4.5 billion in 30 markets since its formation and employs in excess of 4,700 people worldwide.

Digicel Group, which is close to fully owned by O'Brien, pays out a steady annual dividend of US$40 million, according to Fitch.