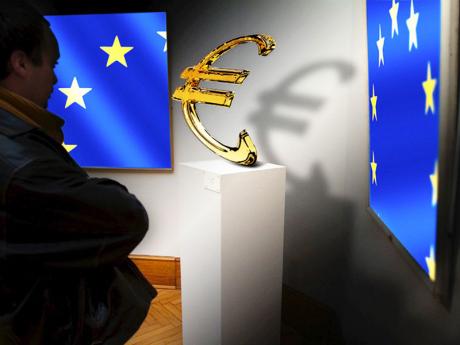 A man looks at a sculpted image of the euro sign. World markets are worried about the potential collapse of more European economies. -File

Spain's finance minister appealed Tuesday for European leaders to set up a method for its troubled banks to get direct financial help and warned that the country's high borrowing costs means that it faces increasing trouble accessing credit markets.

The interest rate on Spain's benchmark 10-year bond rate was at 6.31 per cent on Tuesday and, although declining, was still perilously close to the levels that pushed Greece, Ireland and Portugal to ask for bailouts over the past two years.

Spain has been pushed closer to the edge in recent weeks, with its borrowing costs soaring as investors become increasingly concerned that the government's public finances might be overwhelmed by the cost of rescuing banks that are sitting on massive amounts of soured property investments following the bursting of a real estate bubble that once fuelled the economy. Spain is struggling with an unemployment rate of 24.4 per cent, with more than 50 per cent of people under 25 out of work.

The country has become the focus of Europe's debt crisis because funding the country, the Eurozone's fourth-largest economy, would stretch the region's finances to breaking point.

Spain's most stricken lender, Bankia SA, needs €19 billion (US$23.63 billion) in government aid, but Spain only has €5 billion left in a €19 billion fund that it established in 2009 to help banks.

The government has promised to help Bankia but has not explained how.

European leaders are to hold a summit on June 28 to present proposals on how to save the euro. There, the European Commission and the European Central Bank will present measures expected to include creating a "banking union" to oversee banks and possibly even hold the power to offer bailouts directly, bypassing national governments.

Montoro said Europe was showing itself to be more and more open to the idea but had to move faster.

"What's at stake is the European project of the euro," he said.

Spain is keen for its banks to be able to seek help directly because if Spain were to ask for it from the EU bailout fund, the aid would come with strings attached - its fellow countries in the 17-nation Eurozone and the International Monetary Fund could impose certain policies on the Spanish government, something the country is keen to avoid.

However, Montoro reiterated the government's conviction that Spain will not need outside help, saying, "The men in black will not be coming to Spain," in reference to international inspectors who make periodic inspection tours of countries that receive bailouts.

figure 'not that high'

Montoro also told the Onda Cero interviewer that the amount of money needed to prop up Spain's troubled banking sector is not excessively high.

He spoke a day after Banco Santander SA chief Emilo Botin estimated troubled Spain banks would need €40 billion to shore up their defences to cover toxic loans and mortgages.

Montoro avoided setting an overall figure but said the government would have a clearer idea once two international auditing firms contracted to study the health of Spain's banks report at the end of June. Some estimates have put the cost of a complete bailout for the Spanish banking sector at some €100 billion, more than double Botin's estimate.