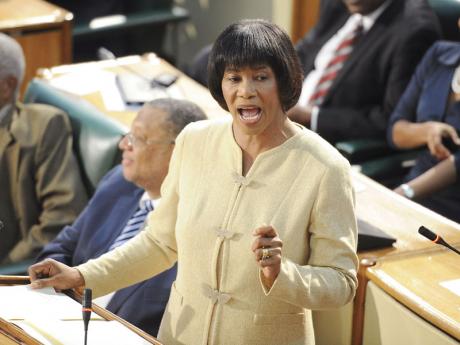 DECLARING her Government would focus its policy to support the efforts of the National Housing Trust (NHT), to make affordable housing available to contributors to the Trust, Prime Minister Portia Simpson Miller yesterday unveiled a raft of measures, which she said were aimed at stimulating the economy.

Interest rates for the two lowest income bands for the NHT are to decrease effective September 1. Simpson Miller said contributors who qualify for loans at three per cent would now repay only one per cent.

The prime minister was making her contribution to the 2012-2013 Budget Debate in the House of Representatives.

Simpson Miller announced that contributors who qualify for five per cent would now repay only three per cent.

The special reduced rates will apply for three years.

"Members of this House may be aware that approximately 55 per cent of NHT contributors earn less than $10,000 per week. The housing trust is, therefore, coming up with a number of new measures to assist this vulnerable group," the prime minister said.

Simpson Miller said the NHT was to benefit from tax-free status in respect of general consumption tax, stamp duty, property tax and transfer tax for the next two years.

"The NHT will pass on this benefit thereby enabling more affordable housing for that category of beneficiaries," she said.

The prime minister announced that home grants to the tune of $1.2 million for each qualified application would be allocated daily on a first-come basis to walk-in contributors.

"This is not a one-time arrangement, it is a policy that will remain in place for the foreseeable future," she said.

She said 10 per cent of home grants would be reserved for qualified applicants with disabilities.

The prime minister also announced that, starting September 1, hotel workers who earn $10,000 per week or less and who apply to the NHT during the next three years would receive a one per cent reduction in interest rate.

Similarly, the one per cent interest rate reduction for public sector workers, which was due to expire next March will be extended until March 2015.

In the meantime, Food for the Poor is to collaborate with the Government to provide 1,200 housing units each year to needy Jamaicans over the next five years.

The houses, which will be constructed under the Jamaica Emergency Employment Programme (JEEP), will be free of cost to beneficiaries.

The prime minister said the houses would be for poor households throughout Jamaica.

"The lands for these housing units will come either from the beneficiaries themselves or government-owned lands," the prime minister said.

Dr Morais Guy, minister without portfolio in the ministry of transport, works and housing, said the

units to be provided under this programme will be two-room board houses with concrete base.

Simpson Miller told the House of Representatives that Food for the Poor, the housing ministry and the NHT would collaborate in providing starter units for contributors earning between $5,000 and $7,500 weekly.

"Even with the best will in the world, this group of contributors has been underserved for years," the prime minister said.

The houses being constructed under this programme will be 16-by-20 units consisting of a kitchenette and a bathroom.

"These programmes will not be partisan political. They are about the people of Jamaica and not any party colour," the prime minister said.

She added that the beneficiaries of the starter-unit programme would be coming from the NHT.

Simpson Miller said the housing projects are testimony that the JEEP has been meeting its objectives.

"JEEP was not an empty election promise. It is about restoring dignity through gainful employment to thousands of Jamaican families," Simpson Miller said.

The prime minister said $6 billion has been identified and secured for JEEP programmes this fiscal year. She said more than 5,800 Jamaicans have been employed under the programme to date.

Simpson Miller said the NHT would contribute $10 million this year to JEEP. She said the money was for administration of training, certification and employment promotion.

In the meantime, three housing schemes are to be built in Longville, Clarendon; Mandeville, Manchester and Creighton Hall, St Thomas.

The prime minister also announced that her Government would be spending more than $1 billion to relocate eight sugar barracks in St Thomas, Clarendon, Westmoreland and Trelawny.