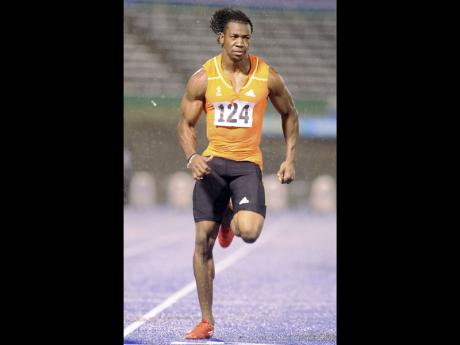 Blake ... 'I work twice as hard as everybody else.'

NEW YORK (AP):'The Beast' trains well into the night after everyone else has long since left the track.

And he rarely takes time off, even when his coach pleads with him to rest because it's a holiday.

Because of that, Yohan Blake, the sprinter nicknamed 'The Beast', just may be the only one on the planet right now who can possibly keep up with world-record holder and reigning Olympic champion Usain Bolt at the London Games.

Who knows? Maybe even dethrone Bolt, the king of the 100 metres.

He sure has Bolt's attention. Hard not to, really.

It was Bolt who actually tagged Blake with 'The Beast' moniker after witnessing the relentless and rigorous workouts of his Jamaican team-mate on a routine basis.

Even though they may be standing in each other's way for a gold medal in London, Blake and Bolt still train together and rely on the sage advice of the same coach in Glen Mills.

But the tips Bolt once doled out so freely are perhaps a little more scant.

He's already taught the 22-year-old Blake so well. Possibly even too well.

Now, Blake is after Bolt's crown and chasing his records.

So, can Bolt be beaten?

"We're all human at the starting line," Blake said.

While Bolt plays for the cameras and shines when the spotlight is on him, Blake tends to be a little more reserved.

Only, he won't be able to avoid the attention this weekend at the Adidas Grand Prix in New York if he accomplishes what he's not per se setting out to do, but would gladly take should it take place - break the meet record held by Bolt.

This event was actually where Bolt, then just 21 years old, first began breaking world marks, flying down the track in a time of 9.72 seconds on May 31, 2008. Bolt ran a 9.69 nearly three months later to win gold at the Beijing Olympics and lowered the record even more with a time of 9.58 at the '09 World Championships in Germany.

That's where the world mark currently stands, as Blake and every other sprinter fully knows.

Blake's best-ever time is 9.82, which he set last season. Chasing after Bolt's Grand Prix time won't be easy and hardly a priority.

"I want to go and have fun, let the crowd enjoy their money's worth," Blake said.

He's not rattled by Bolt and far from intimidated. That's what happens when you train that close to dominance. He's seen Bolt's talent up close virtually every day.

These days, Blake's focus remains on improving his starts, so he can gain some early separation from Bolt, who's a good six inches taller and takes a fraction longer to uncoil out of the blocks.

Blake's form in the opening 30 metres is vital as well, just so he doesn't give the lead right back to Bolt, who is so powerful when he's up to speed and the finish line is in sight.

"I don't really focus on beating Usain Bolt," Blake said. "Coach Mills has been preparing me for this day. I know what I can do."

His confidence keeps soaring, too. He took Bolt's 100 title at the Worlds last summer in South Korea.

One big caveat on that victory, though: Bolt wasn't on the track. Just before the final, Bolt jumped from the blocks early and was disqualified by a zero-tolerance false-start rule. No Bolt meant a rather easy stroll in the park for Blake.

A definite highlight for the sprinter from St James, Jamaica, who has steadily risen through the ranks in a country filled with talented young sprinters.

On the horizon is an even more demanding challenge: Finishing in the top three at the Jamaican trials later this month. That may be just as difficult as earning a spot on the podium in London, especially since Blake should be joined in the field by Bolt and former world record holder Asafa Powell.

And those are just a few.

"All the guys are really, really fast. Most of them are going to be in the 100 finals at the Olympics," Blake said. "It's going to be difficult one, because nobody's spot is guaranteed. You have to be ready."

Bolt has playfully suggested that Blake may be the favourite in the 100, but the 200 is under the Bolt's control.

The Jamaican sensation has the world record in that, too, finishing in 19.19 at the Worlds in 2009. But Blake is closing the gap there as well, going 19.26 at a meet in Brussels last September.

In that race, Blake used Bolt's advice and ran a more subdued curve before kicking it into high gear.

"I push him and he pushes me," Blake said. "He has had a big influence on my career. I started really young at racing and from there, he was talking to me. He was like, 'Yohan, look, you need to train hard'."

And thus The Beast was born.

Asked about Bolt and Blake, Mills sidestepped the inevitable comparison.

"They're not on the same point in their career," Mills said. "One is advanced and one is starting. They're two exceptional young athletes capable of superlative performances on any given day."

Blake won't reveal his late-night training secrets that make him faster on the track, but hinted that it has something to do with core work and mental preparation.

"I work twice as hard as everybody else. That's why they call me The Beast," he said.

There is one blemish in Blake's past. He served a three-month suspension in 2009 for taking a banned stimulant before the Jamaican National Championships. But he said that dark cloud doesn't hover over him.

"In life, you have to hop hurdles. That was my first hurdle," he said. "In order to get to success, there are going to be a lot of things to cross. I think I'm crossing them. For that to come early in my career, wonderful. Moving forward is even greater."

His only goal now is standing on the Olympic podium.