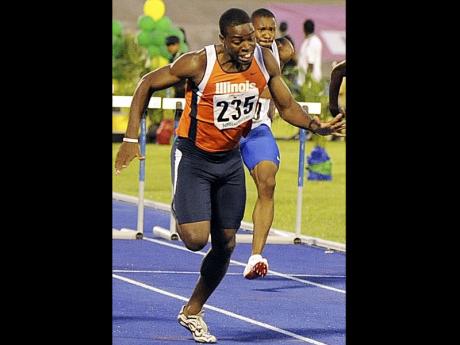 WORLD Championships representative, Andrew Riley, is one of several Jamaicans who will be seeking glory over the next four days at the National Collegiate Athletics Association (NCAA) Outdoor Championships, which will begin today at Drake University in Des Moines, Iowa.

Riley, competing in his final season for Illinois University, will be gunning for the double as he is the top seed in the men's 100 metres with a personal best of 10.03 seconds and ranked number two in the 110 metres hurdles with 13.33 seconds.

Last year's runner-up Riley, who won the 110 hurdles collegiate event at Penn Relays where he beat the University of West Indies' Hansle Parchment into second, will be seeking his second Outdoor title over the barrier, following his first win two years ago.

His main competition should come from Barrett Nugent of Louisiana State University, who false-started at the Penn Relays, along with Texas A&M's Wayne Davis Jr, the top seed with 13.31 seconds.

Three other Jamaicans in Riker Hylton, André Walsh and Demar Forbes will also be seeking glory.

Hylton, who will compete for Louisiana States University (LSU), will have to do something special if he is to finish among the top three in the men's 400 metres. With a season best 45.89 seconds, he is ranked 11th going into the Championships.

Walsh and Forbes are both ranked number 12 in their events. Walsh, who will represent the University of Maryland Eastern Shores and is coached by Jamaican Ernest Barrett, has a best of 50.46 seconds in the men's 400 hurdles. Forbes, competing for LSU, will be hoping to improve on his 7.72 metres in the men's long jump.

Former World Junior 400m representative, Jodyann Muir, along with former Edwin Allen long jumper Francene Simpson, are both ranked number four in their individual events. Muir, of Missippi State University, has a best of 52.00 seconds over 400m, while Simpson, a junior at Kansas University, has abest leap of 6.55m.

Jonique Day of LSU and University of Texas' Daniel Dowie are ranked fifth in their event. Day, formerly of St Jago, has a season best 52.11 over the 400, while Dowie, formerly of Wolmer's Girls, recorded 56.67 seconds in the women's 400 hurdles.

Former St Hugh's High sprint hurdler, Shaneika Hall (LSU), will compete in the 110m hurdles where she is ranked number 13 with a season best 13.11 seconds.