Weir looks to dip under 20 seconds 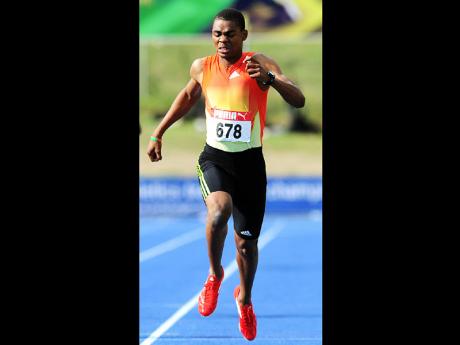 As he prepares for his second Diamond League appearance in New York this weekend, the former Calabar High sprinter is looking to go one better.

"I am hoping to get four points," Weir said in reference to the points awarded for winning a Diamond League event. It must be noted that his personal best was run into a headwind of -2.0m/s.

So far this season, the 23-year-old member of Racers Track Club has run personal bests - 20.21 at the Jamaica Invitational on May 5 and just a few days later, 20.13 in the Cayman Islands. The times were particularly impressive considering that the former was run after Weir had just restarted training after being ill for two weeks. With this in mind, he feels he is capable of breaching the 20-second barrier in New York on Saturday.

"It's my final race before trials so I am looking for a personal best, and at the same time I am looking to work on my technique and to come out of the race healthy," he said.

"I am stronger now and healthier, so going under 20 seconds is a possibility."

If Weir is sounding a bit confident, he believes he has good cause.

"Training has been going well, perfect, I would say. I am confident to the point where I know I can go out against any field and do my very best," he said.

He says this knowing what he is going to be up against if he is to make the Jamaican team to London this summer. Going up against the two fastest men in history over the 200 metres - Usain Bolt (19.19) and Yohan Blake (19.26) - Weir is very aware of the task that lies before him.

In addition to Bolt and Blake, he will also face quality sprinters like Ashmeade, whose personal best is 19.91 and who clocked a fast 9.93s over the 100 metres in Eugene, Oregon, last weekend, as well as Ramone McKenzie, Marvin Anderson and Kenroy Anderson, among others.

"It is going to be tougher than the Diamond League," he said of the Jamaica trials. "There won't be any baby steps, no easy rounds. Each round is going to be hard."

Those races, however, are still three weeks away. For now, he is focusing on Saturday and following coach Glen Mills' advice, which is to "run smart and come out injury free".