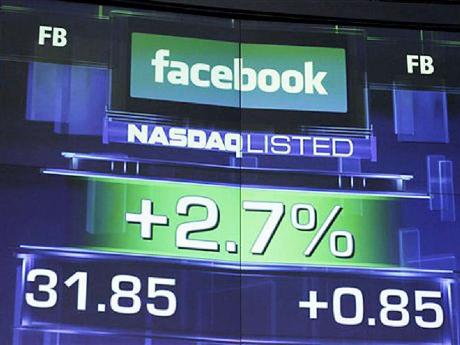 This file photo shows the pre-market price for Facebook at the Nasdaq MarketSite in New York. - AP

The Nasdaq stock exchange said Wednesday that it plans to hand out $40 million in cash and credit to reimburse investment firms that got ensnared by technical problems with trading Facebook stock.

Facebook went public May 18 amid great fanfare. But computer glitches at the Nasdaq plagued the day. They delayed the opening of trading by half an hour and kept some investors from buying shares in the morning, selling them later in the day, or even from knowing whether their orders went through. Some investors have complained that the technical problems left them holding shares that they didn't want.

Nasdaq will pay about US$14 million in cash to investment companies that file valid claims. The rest will be given as credit for the costs that firms have to pay to trade on the Nasdaq.

Nasdaq didn't estimate how much it expected to receive in claims, or whether it thought US$40 million would cover all the claims. But the amount is more than usual. The company has traditionally imposed a $3 million cap for reimbursing customers who lost money because of technical problems.

The stock originally priced at US$38 and closed that first day at US$38.23, a disappointment to speculators who had hoped for a first-day pop. Nasdaq has said it was embarrassed by the glitches, but that they didn't contribute to the underwhelming first-day returns.

Shares went as high as US$45 on the first day but haven't returned anywhere near those levels. The stock was trading at US$25.85 Wednesday afternoon but rose to US$26.15 after the Nasdaq announcement.

The Facebook offering has left a bad taste for many investors, though they don't blame Nasdaq alone. Many also think that Facebook as well as Morgan Stanley, the main bank that underwrote the deal, overestimated demand, pricing the shares too high and issuing too many of them.

The Nasdaq is locked in a constant battle for listings with its chief rival, the New York Stock Exchange. The NYSE, with roots dating to the 18th century and its familiar neoclassic headquarters on Wall Street, bills itself as the reliable and well known. Nasdaq, which started in 1971, promotes itself as a high-tech exchange favoured by high-tech companies, including Apple and Google.

Nasdaq says the problems have been fixed and that it has hired IBM to review its operating systems. It needs approval from the Securities and Exchange Commission for its reimbursement plan.