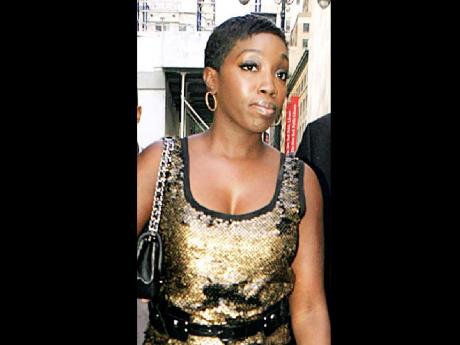 Grammy winner Estelle is thrilled to be coming to Caribbean Fashionweek (CFW) 2012.

The singer of the number one hit American Boy has been all over social media expressing her keen desire to perform at the seminal fashion event in the region.

A fashionista herself, the singer tweeted about CFW saying, "ever since I read about [the event] in SHE Caribbean, I have wanted to come to see some of the fashion the Caribbean has to offer."

This past week, Estelle was the featured interview on the Canadian edition of Elle.com and the Belfast Times, where she talks about fashion, her personal style and the stars in the business she admires.

The music star spoke of her personal style as being 'comfortable' and declares that dressing for her figure is what is important; trend dressing, she says is definitely not for her. The British-born singer, who has Senegalese and Grenadian roots, is no stranger to the runway, having walked for Naomi Campbell's Fashion Relief show to raise money for Haiti.

With her album All Of Me now out, the R&B star is set to perform her big hits as well as introduce some rich new material to the CFW audience. The album already has chart-topping songs with singles featuring John Legend, Trey Songz and Chris Brown. The lead single Break My Heart features American rapper Rick Ross.

Estelle's work has earned her numerous awards and accolades, including one BET award, two MOBO awards, one UMA award, a World Music Award and a Grammy for Best Rap/Sung Collaboration for American Boy. She will be live in concert at Caribbean Fashionweek on Saturday, June 9.

Caribbean Fashionweek 2012 starts Thursday. The event not only marks the return of Cedella Marley, but also a cast of the region's best-established and emerging designers, headed by the likes of Meiling, Gavin Douglas, Biggy, Atelier Dore, Robert Young and Mutamba.

A suite of new features coupled with the CFW staples - global music superstar performances including Brian McKnight, the after-parties and the party bars, are a part of the offerings this year.

The business aspect of the Caribbean fashion industry's main event will also remain a solid element of CFW, packaged not only to entertain but to encourage business networking and the development of the regional industry. World leading fashion expert David Jones will join fellow Briton and public relations professional Jessica Huie at the Caribbean Export and JAMPRO-sponsored business forum.

The annual general meeting of the Caribbean Fashion Industry Association will also be held at CFW, just ahead of the workshop at the business forum on Sunday.