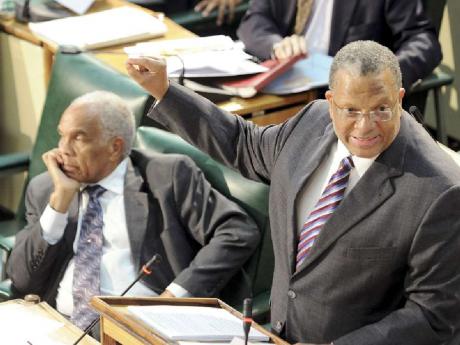 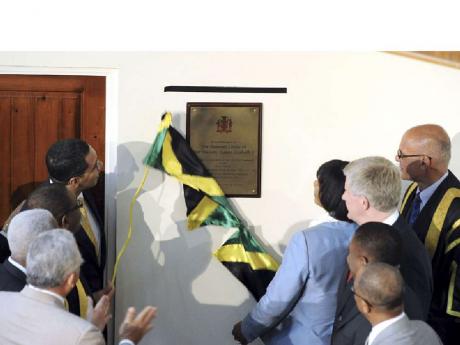 Prime Minister Portia Simpson Miller (right, background) and Opposition Leader Andrew Holness (left, background) unveil a plaque in commemoration of the Diamond Jubilee of Queen Elizabeth in Parliament yesterday. Simpson Miller, Holness, Speaker of the House Michael Peart (right) and Senate President the Reverend Stanley Redwood paid tribute to The Queen during the sitting, which saw members of the Senate joining their colleagues from the Lower House. Looking on is British high commissioner to Jamaica, Howard Drake (second right), and other parliamentarians. - Norman Grindley/Chief Photographer
1
2

BRANDING THE Government as responsible and sensitive, Finance Minister Dr Peter Phillips yesterday reversed a series of revenue measures which he had announced late last month.

"We have heard and we are prepared to listen. As a government led by my prime minister, our prime minister, we believe that we must be sensitive to the cries of people," Phillips said.

"We need the revenue, but most of all, we are trying to create an environment where people can grow their way and improve their own personal life by enterprise," he added.

Yesterday, as he closed the 2012-2013 Budget Debate in the House of Representatives, Phillips said the Government would no longer be imposing general consumption tax (GCT) on animal feed and raw foodstuff.

He also said the Ministry of Education is to identify specific textbooks which will be exempt from GCT.

It was the second accommodation to be made by the Government to allow an exemption from the tax on schoolbooks.

Following the announcement of the tax last month, Phillips said his ministry has been in discussions with the education ministry and was working on an arrangement "which would allow books needed for schools to be purchased through the Ministry of Education for the schools, so that children who are in need of those can get them without the GCT being applied".

Yesterday, the minister told Parliament the Government recognised that the book-selling industry "would be undermined were the bookshops to lose the sale of textbooks".

In the meantime, Phillips said despite the lowering of the standard rate of GCT from 17.5 to 16.5 per cent, there have been instances of unjustified price increases.

"Unfortunately, we are already witnessing situations where prices on some food items have been unjustifiably increased and this is outrageous," he said. "How can the lowering of GCT on chicken patties result in an increase in the price of chicken patties?"

All patties, with the exception of beef, were subject to GCT, but beef was brought into the GCT net last month.

"We will be asking the Consumer Affairs Commission to focus its monitoring on some food items to ensure that the benefits are passed on to the consumers," the minister said.

He has called for consumers to reject unjustifiable price increases and report instances of such increases.

In the meantime, the Government has not
back down on its plans to charge a tax on the termination of
international calls on the local network.

Phillips in
May announced a tax of US7.5 cents per minute on all international calls
terminating on the mobile network. However, Opposition Spokesman on
Finance Audley Shaw expressed doubt that it could be collected. He
argued that the tax was extraterritorial.

Phillips had
also announced a J30 cents-per-minute tax on all domestic calls
terminating on mobile and fixed line networks.

The
minister yesterday announced that the modification would only apply to
the domestic side. The changes will see a charge of five cents per
minute on calls originating and terminating on a fixed network. There
will also be a J40 cents-per-minute charge imposed on all calls
originating in Jamaica.

Phillips told Parliament that in the case where
free minutes are offered by service providers, tax would not be
applicable for these minutes up to 30 per cent of total call time - both
free and billed.

The tax will not apply to calls to
emergency numbers, calls to access voicemail, customer care or for
balance enquiries.

Phillips has announced the
imposition of addition stamp duty of 15 per cent on imported sheep and
goat meat, ham, shoulders, and other cuts, bacon and
yoghurt.

This is in addition to an existing five per
cent tariff now charged at the port. The measure will take effect on
July 1.

"There are commodities that can be produced
here in Jamaica," Phillips said. He argued that "local goat farmers and
pig farmers and others will be able to boost their
production".

"If we continue, as a country, to import
US$1 billion every year, we will always have a problem in finding
foreign exchange," the finance minister said.

The Government is seeking to
collect $19.3 billion through new revenue measures this fiscal year to
help fund the $612-billion Budget.

The minister said
the revenue loss through the revised measures would be made up through
the additional stamp duties and reduction in
waivers.

CAPTION: Prime Minister Portia
Simpson Miller (right, background) and Opposition Leader Andrew Holness
(left, background) unveil a plaque in commemoration of the Diamond
Jubilee of Queen Elizabeth in Parliament yesterday. Simpson Miller,
Holness, Speaker of the House Michael Peart (right) and Senate President
the Reverend Stanley Redwood paid tribute to The Queen during the
sitting, which saw members of the Senate joining their colleagues from
the Lower House. Looking on is British high commissioner to Jamaica,
Howard Drake (second right), and other
parliamentarians. - Norman
Grindley/Chief Photographer