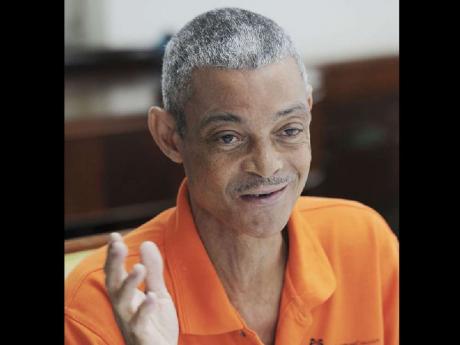 Hugh Bruce: At KPH, the reality hit me when I saw most of the people around me started dying one by one. - Ricardo Makyn/Staff Photographer

Tobacco smoking kills more than five million people each year, according to data from the World Health Organization (WHO).

The WHO says up to half of current tobacco users will eventually die from tobacco-related disease and the majority of smoking addicts took their first draw at a young age.

When 57-year-old Hugh Bruce took his first puff of tobacco - in the form of a cigarette at age 12 - facts like these might not have been around. Even if they were, chances are he would have turned a blind eye. After all, it was the age when smoking was 'cool' and most of his friends at the prominent high school in Kingston he attended were also lighting up.

Forty-five years later - after a long and trying road to recovery - Bruce looks back at his decision at age 12 and likens it to one signing a deal with the devil.

"It's the devil, that's what I call it," he told The Gleaner following a recent Editors' Forum at the newspaper's North Street, central Kingston, offices.

It's been five years since he took his last puff, and today he is in high spirits because he has finally managed to shed the monkey from his back.

Now, he is using his breath of fresh air to share his story, warning youngsters, in particular, not to make the ill-fated decision.

It was in first form when he and five other boys, one a current government minister, decided to form a smokers' club. They would rendezvous at the bathroom after lunch, light up a cigarette, and each of them would take a puff and pass it around.

"You know when you a grow a strand a hair and you want to look big ... . It was mostly peer pressure at the time," he said. His habit continued throughout his local high-school years and intensified when he went to Canada to finish sixth form.

In Canada, he claimed there was no ban on smoking in schools, and purchasing a pack of cigarettes was relatively cheap. It was as if he had died and gone to smokers' heaven.

"I found out I could use Jamaican 10 cents in a cigarette machine and that would give me a whole pack. So every time I came to Jamaica, I would carry up a bucket of 10 cents to support my habit," he said.

Starting a career in the music business as a sound engineer did more harm than good for him, as he was also taking in second-hand smoke that would cloud the studio.

At this time, he was 30, and the early signs of trouble started to emerge.

"After a while, I realised every time I would get a cold," he said. "During the winter, I couldn't stay in Canada because the cold would get so bad, I couldn't breathe."

Bruce added: "About 1988 thereabout, I decided to leave Canada, so I packed up my studio and moved back to Jamaica. After some time, I just gave up my studio because I just couldn't manage it."

A career in music would not be the last thing he sacrificed at the altar of tobacco in order to continue his habit.

"The addiction took a hold on me that in the evening, I didn't want to eat unless I had a cigarette. In the morning, I had to have a cigarette. In the late hours of the night, you would hear my gate opening up, and I would be gone to Liguanea [for] a smoke."

He said: "My sex life was affected. After a while, I decided to give up sex because I just couldn't finish the job."

Like most smokers, he said he tried several times to shake the habit, but always failed in the end.

"I tried several times well, but it would only last for a week the most. I would be sleeping at night and be dreaming that I am smoking. I would get up out the bed and just take a smoke."

He finally got on the road to recovery seven years ago when he was admitted to the National Chest Hospital, then to the University Hospital of the West Indies, and later at Kingston Public Hospital (KPH), where he was diagnosed and treated for chronic emphysema. This disease, which attacks the lungs, makes breathing difficult.

"I went into Chest Hospital with just 40 per cent lung capacity and spent 10 weeks in aggressive physiotherapy ... . Before that, I could hardly take a shower. I had to soap up, take a rest, wash off, take a rest, and then dry myself off. It was hard."

But even while going through his treatment, quitting was difficult.

"I remember one time while at Chest Hospital I hid and took a smoke and a nurse saw me. She said to me, 'Mr Bruce, you really a smoke?' This went on my file and when I went to KPH, I remember the doctors looking at me like there was no hope. It's like they were saying, 'If you don't want to help yourself, then we can't help you'. I felt really embarrassed."

He added: "At KPH, the reality hit me when I saw most of the people around me started dying one by one. You would see the curtains drawn and someone would say, 'Him dead'. These were the same persons who would tell me, 'Nuh bother with the smoking'."

After this awakening, Bruce finally summoned the courage to give it up altogether out of fear of suffering a similar fate. But, especially with his chronic emphysema, he is still paying dearly for going down this road.

Even with my NHF (National Health Fund) deduction, I still have to find $10,000 per month for my medication.

"It is a serious thing that is going to cost you, one way or another," he said.

"However, I have to give God thanks for the crew at Chest Hospital who saved my life. Today, my prayer has changed from thanking the Lord for every breath that I take to thanking him for every breath he has given me. There is nothing worse than when you cannot breathe," he said.