Listen to your children, says Scott-Shaw 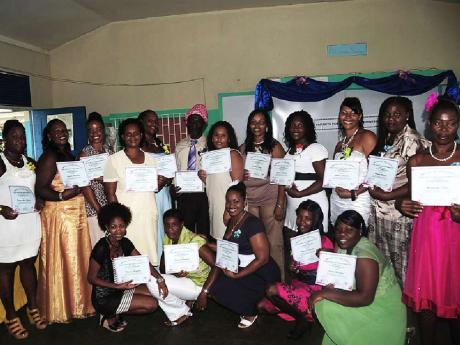 The 19 parents who participated in the the Parents for Change programme for parents of students enrolled in the Alternative Secondary Transition, Education Programme show off their certificates of achievement at their graduation at the Revival All-Age School, Sheffield, Westmoreland, last week Thursday. - Photo by Barrington Fleming

EUNICE SCOTT-SHAW, the regional director of the Child Development Agency, has said the Alternative Secondary Transition Education Programme (ASTEP) is the State's response to the chronic lack of parenting skills and general neglect of the needs of children.

Scott-Shaw, who was addressing last week Thursday's Parent for Change programme graduation ceremony said a strong child/parent relationship, which includes partnership with the school environment, would nullify the need for ASTEP.

The ceremony was for 19 parents who participated in a 20-hour session for parents of students involved in the ASTEP at Revival All-Age, Little London Primary and Broughton Primary schools, all in Westmoreland.

"You need to build relationships with your children. They are intelligent, talk to them more and beat less," said Scott-Shaw. "When you beat them for everything, you shut them up; when you talk with them they share more with you. You learn more about their friends, teachers and others impacting their lives. Love them, embrace them, share with them."

Turning her attention to a spike in the incidents of child sexual and physical abuse, Scott-Shaw said the frequency of reported cases should be reason enough for parents to raise the red flag and move to curtail these debilitating acts.

"Mothers, for God's sake; everything your daughter tells you believe it, until you can prove that it is not true. The general thought is innocent until proven guilty, but now it has to be that the accused are guilty until proven innocent in this case," declared Scott-Shaw. "Many times I cry with children because there was no father and many times mothers knew what was happening to the children and did nothing about it."

ASTEP was created for children who have completed their years in primary school without being certified literate by achieving mastery in the Grade Four Literacy Test and have been barred from sitting the Grade Six Achievement Test.