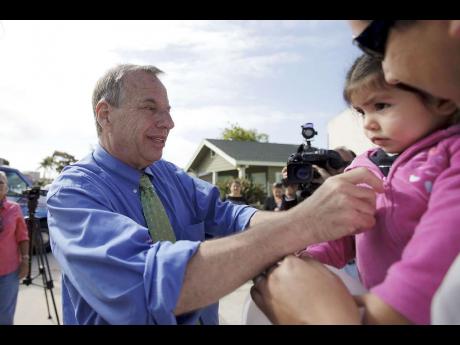 San Diego mayoral candidate and US Republican Bob Filner (left) puts a sticker on Izel Alvarez, 2, after casting his ballot on a primary election day on Tuesday, in San Diego. Filner, 69, is the lone Democrat on the ballot to become mayor of the nation's eighth-largest city. - AP

A six-way Republican primary race for a House seat representing the Des Moines suburb of Ankeny is left unresolved after none of the candidates received the required 35 per cent of the vote to win outright.

Primary races in which no candidate reaches the threshold must go to a special nominating convention of central committee members called by the party chairman.

Votes in House District 37 will be canvassed June 25 to ensure the initial count doesn't change.

In Tuesday's voting, Jim Robidoux received 34.39 per cent. Matt Devries had 29.72 per cent and John Landon 17.34 percent. Jeffery Wright had 15.41. The remaining two candidates received less than 2 per cent.

At the convention, candidates are invited to speak to the central committee before votes are taken.