Ruiz looks to lead from the front 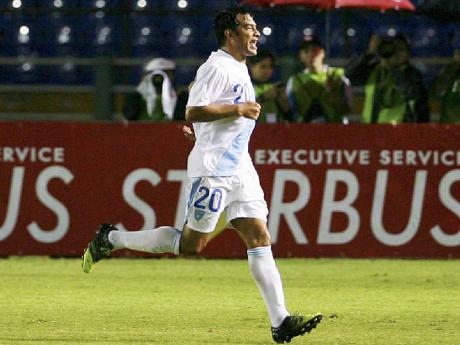 Being one of Guatemala's most capped players, Carlos Ruiz is hoping his experience will pay dividends, as he seeks to guide the team to its first-ever appearance at the World Cup.

In the South Americans' quest to qualify for the 2014 tournament to be staged in Brazil, they will first have to make it out of their CONCACAF World Cup Qualifying (WCQ) semi-final group which comprises Jamaica, the United States of America, and Antigua and Barbuda.

Guatemala's first Group A opponents will be Jamaica, when the teams meet tomorrow at the National Stadium in an 8:30 p.m. kick-off.

"I have a lot of experience. This is going to be my fourth qualification (qualifying tournament) for the World Cup," Ruiz revealed.

"We have a lot of young guys in the national team, so my role in this team is to try to be an example on and off the field. I feel the team is filled with energy, so we are going to try to do a good World Cup qualification and we will see if we can get far," he added.

Guatemala appear to be in a no-nonsense mood since arriving at the Norman Manley International Airport, with their coach, Ever Hugo Almeida, denying interviews first at the airport, and then again before and after their training session at the Anthony Spaulding Sports Complex on Tuesday. Almeida also ordered that yesterday's training session be closed to the media and the public.

"We need to focus as we have the first game against Jamaica, which is one of the best national teams in the Caribbean, so we want to try to play good and hard, and we will see after the game what is the other result between the United States and the other island," Ruiz outlined.

Ruiz, who currently plays for second division Mexican club Veracruz, spent a number of years in the US Major League Soccer where he represented clubs such as Los Angeles Galaxy, FC Dallas, Toronto FC and Philadelphia Union. The 32-year-old leads his country in scoring, having netted 49 goals, including the winner in a 1-0 win over Costa Rica in their most recent outing.

Guatemala have failed to get the better of Jamaica in 12 previous meetings, suffering nine defeats while three ended in draws.

"We will see if we can tie or win here (in Jamaica) and then, we receive the United States at home and try to win that game," Ruiz shared following Tuesday night's training session. "The main point is to come here and tie or win the game."

Meanwhile, newly elected CONCACAF president, Jeffrey Webb, will pay his first official visit as CONCACAF boss to a member association when he attends the Jamaica vs Guatemala match.

Webb will arrive today and will be met on arrival by Captain Horace Burrell, president of the Jamaica Football Federation (JFF).

Also arriving on the same flight will be Winston Chung Fah, former JFF technical director who recently received FIFA's highest Honour, the Order of Merit. Chung Fah, who has been specially invited to the match by Burrell - with his wife, Barbara - will be presented with a special award by the JFF before the start of the game.