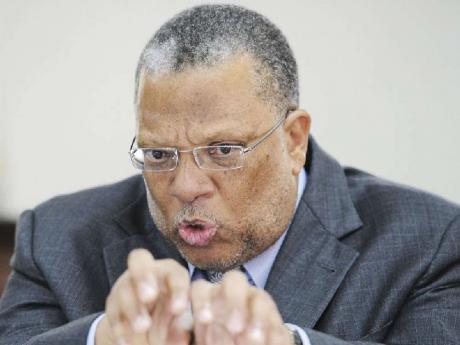 Finance Minister Dr Peter Phillips is caught between a rock and a hard place - Jamaica's debt and deficit. - File

This is a guiding principle, an abiding tenet of ideology underpinning notions of reducing government's economic activity and expenditure in all circumstances, including periods of recession.

Austerity programmes in the Eurozone's troubled states are clearly not working. Nearer home in the United States, the Republican blockade - to defeat Obama - of stimulus spending delivers the same result.

It is instructive to note that while private-sector hiring has been climbing for months in the US, government job growth declines. The result is that the global economy shall not recover anytime soon.

The hard part to fathom, from a purely economic standpoint, is the fact that the policy of austerity flies in the face of both economic theory and revealed history of application of Keynesian policy that pulled the global economy out of the 1929-30s great depression.

Jamaica now confronts the sharp horns of a dilemma. Money printing stimulus is out of the question. The debt burden is already too large, taking reliance on expanded borrowing off the table.

Finance Minister Phillips sits between the proverbial rock and a hard place. His budget openly displays this dilemma. It is instructive to remind ourselves of a different quote from Adam Smith's 1776 work before discussing aspects of the budget presented to Parliament.

The poorest and wealthiest subjects of the Jamaican state pay the same GCT on goods and services they consume - undifferentiated.

It is incredible that commentators should describe GCT as a progressive tax. It isn't. Consumption taxes are known even to neophytes of economics, to be regressive. Attempts to avoid the worst consequences of this outcome lead to exemptions for items normally in the basket of goods the poor consume - bread, chicken necks and backs, cornmeal, sardines and the like - as opposed to anchovies, caviar, champagne and lobster tails.

It is indeed a noble objective, to which we might pay lip service: citizens should pay taxes according to their ability, that is, their revenue generated from economic activity within the state.

It is, however, not what exists in today's Jamaica. Tax avoidance, waivers for privileged importers, tax holidays for chosen activities and other mechanisms defeat this noble aspiration.

Prime Minister Portia Simpson Miller campaigned with the objective of caring for the mass of the people. Yet, there are elements of the tabled taxation proposals that invite negative, if unintended con-sequences, at odds with the general thrust of the Prime Minister's enduring and credibly persuasive narrative.

Fondly referred to as 'Sista P' and 'Mama P', she enjoys immense popular support precisely because she's perceived to be, from the days of early Stone Polls, as genuinely caring.

The J$60,000 annual tax on registered companies seems particularly ill-advised. Jamaica's informal sector is large. It contains motivated and innovative persons whose businesses, in many instances, ought to be encouraged and assisted to advance to the formal sector.

By their very nature, along with formal sector medium and small-scale enterprises, these entities require the labour of both their owner/operator and others. Having little or no capital, labour intensity is their survival.

To tax registered companies merely for being on the rolls seems a move entirely wide of the mark. Furthermore, this tax is devoid of equity. It may more than likely gather insignificant sums of money and lead to deregistration of companies that possibly have promising futures.

This is an anti-growth measure that may actually prove nothing but a nuisance unless some credible, more targeted mechanism is found that does not penalise innovation.

On the issue of basic food items now being considered for GCT, is this the only way? What about more realistic taxes on property, abolition of discretionary waivers unless subject to public hearings at which interested or aggrieved parties might make submissions? Why not greater efficiency in actual tax collections? What about renegotiating existing contracts for our minerals where appropriate clauses exist? Have these avenues been explored?

If the vision for a Jamaica in which people choose to live, work and raise a family is 'serious fi true', we must strike a more harmonious chord for equity.

Finally, reading the report of an agreement to provide 20 years of tax and assorted incentives to Chinese investors in the sugar industry led me to wonder if my eyes played tricks on me.

Did our negotiators have no leg upon which to stand? Can we truly say this firm would invest in Jamaica if, and only if, it is allowed to pay absolutely no taxes for two decades?

Chinese capital finds its way into 'emerging' economies and the Caribbean for clear and obvious economic reasons: the growing Chinese economy is raw material and food-hungry, plus returns are there for the taking as opposed to parking hard currency reserves in 'paper holdings' yielding but a mite.

Two-year US Treasury notes currently yield something like one quarter of one per cent. German notes last week had a yield of one one-hundredth of one per cent - perhaps too sweet to imagine?

It's like the national Streamer Tail Humming Bird in his own Flame tree: endless nectar, so 'nuff humming gal'!