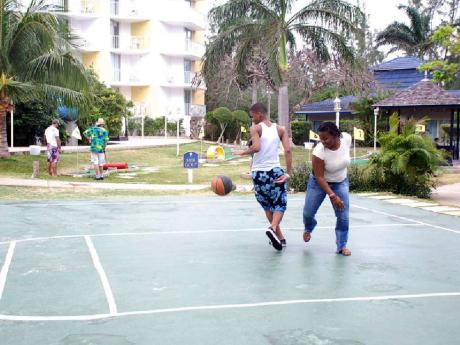 A section of Breezes Trelawny.- File

The integrated Canadian tour company Sunwing is the new owner of the former Breezes Trelawny hotel.

On Wednesday, SuperClubs' vice-president of marketing and environmental affairs Zein Issa Nakash, indicated that the agreement for sale had been concluded and executed with the tour company.

A release from the companies which has been posted on global travel sites said that the purchaser of the property is Blue Diamond Hotels & Resorts, a division of Sunwing Travel Group.

It also notes that the resort will temporarily close on June 1, 2012, to facilitate an ambitious $40-million renovation, details of which will be revealed later.

The hotel will reopen to guests as "a four-star plus resort, on November 1, 2012", under the new name of 'Memories White Sands Beach Resort & Spa'.

Nakash declined to disclose the sale price for Breezes Trelawny nor the use to which the funds have been put for the chain, which also recently sold golf resort Breezes Runaway Bay back to Sagicor Life Jamaica Limited.

Breezes Trelawny was purchased by SuperClubs from Finsac in 2000.

At the winter reopening of Braco, Sunwing Vice-president Lawrence Elliott was reported as targeting growth of locally operated rooms to 2,000 four- to five-star hotel rooms by yearend 2013.

At Braco, the company is currently operating the resort under its Blue Diamond Resorts brand, under a short-term lease which should have ended in May.

Audrey Deer-Williams, head of investments at the National Investment Fund, said Tuesday that while the winter season for which Sunwing leased the hotel was over, "an arrangement has been made but it would be premature to say anything at this point."

Sunwing's corporate and sales offices are located in Toronto, Montreal, and Vancouver. Its website notes that it began operation in 2002 and is a family-managed and operated business.

The company includes Sunwing Airlines and Sunwing Vacations. The site claims departures from 33 Canadian gateways to 48 destinations in 21 countries, on a 24-plane fleet including Boeing 737-800 aircraft.

Sunwing does 20 flights per week into Jamaica from Canadian gateways, as well as Cincinnati and Nashville in the United States.