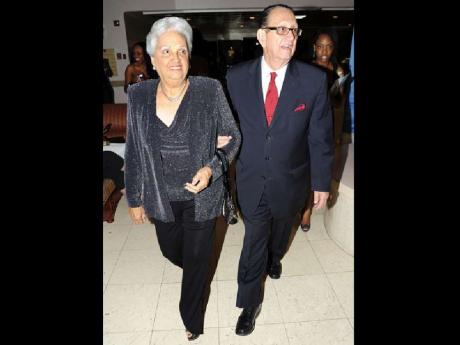 Chairman of Sagicor Life Jamaica R. Danny Williams and wife, Shirley Williams, arrive at the Sagicor Jamaica 40th annual corporate awards ceremony, at The Jamaica Pegasus hotel in New Kingston on Wednesday, March 16, 2011. Danny Williams is a founder of the company, which began as Life of Jamaica. - File

Raby Danvers Williams is one of Jamaica's most recognised business icons and philanthropists whose interests span different sectors and whose national service has spanned both public and private sectors.

But Danny Williams, as he is better known, will always and foremost be recognised for creating Life of Jamaica, a dominant force in the life insurance market that has impacted many Jamaican lives since its founding June 1, 1970.

LOJ is no longer a Jamaican company, and the brand no longer exists. The insurance company fell into financial trouble at the height of the 1990s financial crisis and was sold to Barbadian investors.

The LOJ name and logo has given way to Sagicor Life Jamaica - named for parent Sagicor Financial Corporation - but what has not changed is Williams' involvement in and guidance of the company. He remained a director and is now its chairman.

And Sagicor is still Jamaica's largest and most profitable insurance company with annual revenue currently at J$29 billion and assets of J$161 billion.

Undeterred by Jamaica's recession and sluggish recovery, the company made J$4.9 billion of profit in 2010 and J$5.7 billion last year.

On Sunday, June 3, in recognition of Williams' 42 years of service to the insurance giant, Sagicor named its corporate headquarters in his honour. What was called the Sagicor Centre is now the R. Danny Williams Building.

A bust of Williams was also unveiled at Sunday's renaming and dedication of the building.

"His immeasurable input has enhanced the company's reputation as a caring corporate citizen that continues to play a major role in building a brighter future for thousands of Jamaicans," reads Sagicor's citation to Williams.

But as current president and CEO of Sagicor Life Jamaica, Richard Byles, makes clear, Williams' impact is also felt even more closer to home throughout the company he founded.

"At Sagicor we don't just love Danny, we respect Danny," said Byles at the dedication ceremony that was also attended by Williams' wife Shirley, children, grand and great-grandchildren, as well as former president of LOJ, Adrian Foreman, and Finance Minister Dr Peter Phillips, among others.

Williams' business acumen, coupled with wit and honesty, has been instrumental to his service on the boards of several major Jamaican companies, foundations and organisations, Sagicor added in a release.

Williams, who is a proud Jamaica College old boy, turns 78 on July 3.