Jamaica to spend big bucks on sugar even after privatisation 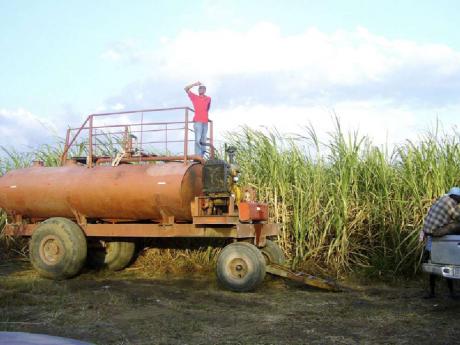 A worker stands atop equipment in a cane field at Frome in this 2009 file photo. At least 53 per cent of funds allocated for sugar in this year's Budget will be spent on housing for former sugar workers.

Despite the divestment of loss-making sugar assets, which wrapped up last year, Jamaica will still be investing big in sugar this year, but more than half the funds are headed into housing for former workers being relocated from privatised estates.

Under the heading of 'agro industries', the Ministry of Agriculture has tapped J$1.896 billion to be spent on sugar, all but J$96 million of which will be distributed through the Sugar Transformation Unit.

The line item is not new - last year, the Government spent J$1.761 billion under agro industries - but this year, it is booked as an obligation that Jamaica will have to fund alone, whereas before it was fully backed by external grants provided by the European Union (EU).

Consequently, agro industries has been reclassified in the Budget from an externally supported Capital B programme to GOJ-funded Capital A expenditure, with sugar accounting for 76 per cent of the total J$2.46-billion allocation.

Still, permanent secretary in the agriculture ministry, Donovan Stanberry, said the J$1.896 billion will be spent from funds provided as "budgetary support" by the EU. Jamaica is eligible for grants totalling €86 million (J$9.4b) under the transition to a new trade arrangement, the Economic Partnership Agreement, and has been accessing funding since 2006, he said.

Last year, Jamaica and the EU spent a combined J$4.4 billion on the sugar sector - including J$2.65 billion to the indebted Sugar Company of Jamaica, footed by taxpayers.

This year's sugar budget will be spent on road repairs in sugar-dependent communities at a cost of J$96 million, relocation of residents from sugar barracks to new housing, implementation of recommendations in the Wint Commission of Enquiry report on privatised sugar, as well as support for indebted cane farmers.

The Wint Commission had recommended an audit in the operations of the Sugar Industry Authority and the Sugar Industry Research Institute to look at their operations and governance structures. The audit has since been commissioned at a cost of J$8 million. The review, which is expected to include consultations with different sugar interest groups, will be done by PricewaterhouseCoopers.

Prime Minister Portia Simpson Miller said Tuesday that more than J$1 billion will be spent on the relocation of occupants of eight sugar barracks in St Thomas, Westmoreland, Clarendon and Trelawny.

Stanberry had said earlier that the financing was baked into the agro industries allocation.

He said the EU allocation of sugar funds in 2010 was used for redundancy payments to workers under the divestment programme. Now, the focus is on increasing competitiveness and address some of the social problems that arise as a result of the privatisation, he said.

"The bulk of the allocation will be used to provide well-needed housing accommodation for people who work in the sugar industry," said Stanberry.

The level of support to cane farmers was unspecified in the Budget, but a portion of the J$1.896 billion will be used to boost an existing revolving loan fund, which farmers can access to help with replanting of sugar cane and purchasing equipment.

The fund currently has a balance of J$1.1 billion set aside from previous disbursements of the grant, said the permanent secretary.

Allan Rickards, president of the All-Island Cane Farmers' Association, said that the cane-expansion programme is to facilitate replanting of ratoons.

"Under normal circumstances, we are suppose to replant about 16 per cent of the crop every year, but that is not being done. We need to replant because the production and the productivity tapers off after a while or you may wish to change the variety," said Rickards.

Funds borrowed from the revolving pool for replanting or to buy second-hand equipment are disbursed at five per cent and repaid in five years.

Loans for new equipment are also available at five per cent, but repayment is over 10 years. There is no limit on the amount a farmer can borrow.