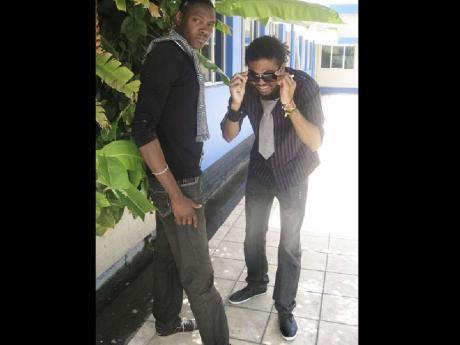 About six or seven years ago, drummer Andre Barnes tried to put a band together to become the official unit for a popular reggae artiste. As a unit, the musicians were good enough, save for one very weak link - the drummer.

The keyboard player, Dwayne Morris, let him know in no uncertain terms that he needed more work. "Mi rush him, tell him to go play him drum," Morris said. Barnes did, going on to play in Kurfew, audition for Chalice, play in the band for Duane Stephenson and support artistes as diverse as Elephant Man and Ken Boothe. "It come together now ... I start to develop a relationship with the artistes," he said.

Morris, on the other hand, having been through the Edna Manley College of the Visual and Performing Arts programme, was well established before, doing shows with Jah Cure, Busy Signal, Elephant Man and others, now doing musical director duties in the backing band for Beenie Man.

So on May 16, 2011, when they went into the studio to make a rhythm, they were musically in sync - but they did not have a name for the music production company they were starting. Barnes came up with Carbon Copy, Morris made the adjustments to make it "something epic", Cahban Rekords. They laid two rhythms that day, the 'Clip' and 'Skasteady', the latter a fusion of ska and rocksteady on which the duo is spanning generations.

They are planning tracks by Beres Hammond, Bob Andy, Coco Tea, John Holt, Jimmy Riley, Bob Andy, Chalice, Ken Boothe, Freddie McGreggor and George Nooks. Going one better, they have not only written the songs and shopped them to some of the artistes, but have done demos with the adept voice changer Donald 'Iceman' Anderson giving a strong indication of how some of the artistes will sound with their tracks.

Barnes pointed out that he made an image change and sacrifice for Cahban. "People have some musicians as gig musicians. Me say if me a do Cahban them have to see us in a different light. You no at every $5,000 gig. You take off the T-shirt, you put on a tie," he said. "People take you more seriously. You put yourself in a different light."

For Morris, there is no clash between his roles in the band for Beenie Man and doing Cahban work. As music director, he said, his job is to ensure that "when the artiste touch stage it right". However, he said, "When I go to a country I have my Cahban promotional CD. When I am on stage I make sure that Beenie Man music right and him a enjoy himself."

Morris pointed out the power of ska at Independence, as well as rocksteady in the early post-colonial years. "We want to go back into that energy. As Andre would say, we are young, but we have old soul. We nah leave the roots," he said.

In addition to the Clip and Skasteady, Cahan Rekords has also done a rock rhythm, an Iceman track slated for release soon, to be followed a week later by another track very different from the rock-influenced music. Another of their rhythms is the House Effects, a mix of hip hop and reggae.

Cahban's tracks are laid at studios where live drums can be used, Barnes and Morris saying that they believe in live music in studio and on stage. Although they have enough equipment to set up a digital studio now, that is not what they want.

And a regular live event is in the making, rounding out Cahban Rekords.