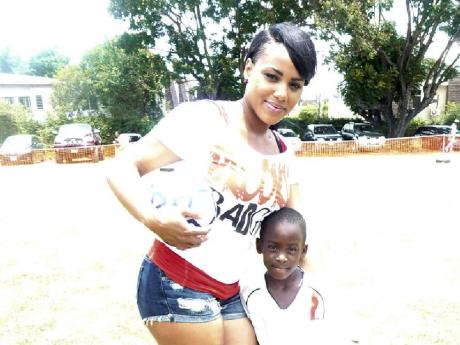 A young footballer from Ballaz International Academy has the attention of Ishawna. 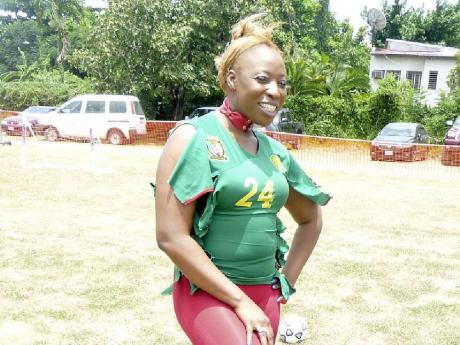 Macka Diamond gets ready to take on the youngsters. 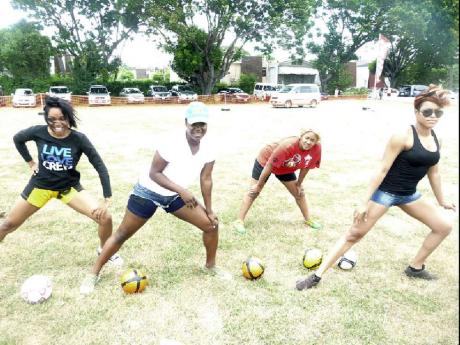 From left: Kimberley Naine, Sasha Bling, Tifa, and Bridgez get warm for a game against the youngsters of Ballaz International Academy at the Liberty Academy football field recently. - Photo by Curtis Campbell
1
2
3

The event, which took the shape of a fun day, was supported by parents and members of the entertainment industry, some actively participating in the activities, others watching while basking in the sun.

Tifa and Lady Rennae started out as the attacking players with Bridgez in goal, Ishawna on the right wing, Macka Diamond playing defence, and Sasha Bling in midfield.

Alliance first lady Bridgez was battered by the young boys who scored three goals on her in less than five minutes. Kim Naine later helped her out and ended up saving a goal before the tally went to four.

Super Girl Denyque and Keida later joined the game and swung the pendulum back towards the ladies of dancehall. Denyque slammed home two goals while Sasha Bling also put one between the sticks.

The game ended 5-3 to Ballaz International.

Macka Diamond said she was a football fan, however, it was her first real experience playing the sport. She also said that influential people should spend more time contributing to youth development.

"I think the event is worthwhile. I love events like these. It's not about money; it's about charity, time, effort and love. If they get a lot of love like this, football in Jamaica will look good. I have seen some today, who, with the right assistance, will be great. Persons should give back even a prayer because giving back will make you earn even more than you thought possible," Macka Diamond said.

Leading goalscorer Denyque said she believes the boys at Ballaz International are the future of Jamaican football.

"I love my Jamaican football team, and I believe in the next 20 years, we will be doing extremely well. The children are definitely the future," she said.

According to Virtue, founder of the Ballaz International Academy, the organisation caters to more than 500 Jamaican children per week; however, the academy needed investment to expand.

"We have an excellent programme, and we have an excellent batch of kids. We wanted to bring the media, celebrities, and people out to give love and time, not necessarily money. This is our future and we need to invest here. We will definitely see the fruits down the road. Sports is a very powerful tool because it mirrors life. Everything that the children will have to go through in life, they will encounter in sports - teamwork, respect, discipline, and character. So if you really want to see a change, then this is where you should invest," Virtue said.

Co-sponsors of the event, GNC Jamaica, also had high expectations for the Jamaica Ballaz. According to Warren Wilson, sales and marketing manager for GNC Jamaica, it is important to be aligned with Ballaz.

"We recognise what Ballaz is bringing to the country in terms of developing the youth, and what GNC wants to ensure is that the youth have proper nutrition," said Wilson.

"From organisations such as Ballaz, which have developed organised programmes like these, which involve youth from an early age, we will develop a larger talent pool of talented footballers. I think corporate Jamaica needs to recognise this institution and what Ballaz is doing and get behind it and really support the venture," Wilson added.

The opportunity was also created for on-the-spot donations and prize giveaways for patrons who participated.