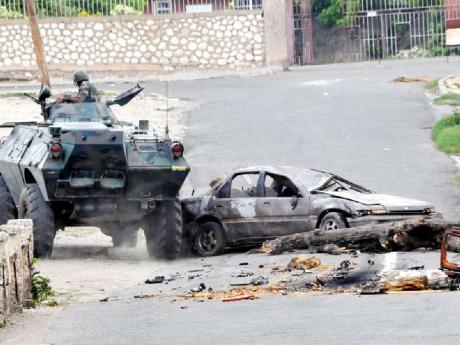 A cable obtained under the United States (US) Freedom of Information Act has revealed that the US Embassy in Kingston told Secretary of State Hillary Clinton that mortars were used by the Jamaica Defence Force (JDF) in the operation to capture confessed gangster Christopher 'Dudus' Coke in Tivoli Gardens in May 2010.

The revelation came yesterday, shortly after the second anniversary of the incursion in the west Kingston community - which left 73 civilians and one soldier dead - and a day before Coke's scheduled sentencing.

Schwartz is the journalist who first revealed the existence of a US spy plane over Tivoli at the time of the offensive.

The subject of the cable is 'Security Forces Assault Tivoli Gardens Stronghold, Civil Unrest and State of Emergency in Kingston'.

The cable describes an all-out assault on the heavily defended Tivoli Gardens "following two days of civil unrest and gang-related violence in several parts of the Kingston Metropolitan Area" by the JDF.

The cable then said, "The JDF fired mortars and then used bulldozers to break through heavy barricades which Coke's supporters had erected to block entry to the fortified enclave."

The revelation by the cable seems to explain claims by residents that the JDF had used bombs in its operation in the community which is a warren-like public housing project with a population of around 25,000 persons.

Speaking with The Gleaner yesterday, a foreign military expert described a mortar as an indirect-fire explosive weapon or a bomb with a tail fin.

He said that military strategy would not allow the use or mortars in any residential area unless the goal was "to kill".

At the time the claim was made by residents in 2010, Brigadier Rocky Meade, now deputy chief of defence staff, told journalists he was unaware of the use of such force.

"I am not sure what persons refer
to when they talk about bombs, so I can't speak to that either," said
Meade at the time.

He also added that the soldiers
were being very careful to protect the rights of persons in the west
Kingston operation.

"Our terms of engagement require
the use of the minimum force necessary to protect the lives of our
troops and persons we are engaged to protect. If there is a specific
report, we will investigate it, and I can assure you that if there was
abuse, that will be dealt with by our internal
processes."

Last night, head of the JDF Civil Military
Corporation Unit, Captain Basil Jarrett, confirmed in a release, that
mortars and bulldozers were used as part of the
operation.

"Prior to the operation in Tivoli Gardens
in 2010, intelligence indicated that there were significant numbers of
heavily armed gunmen massing inside the community, as well as highly
fortified barricades and defensive positions, some of which were lined
with explosives and other incendiary devices. This was subsequently
confirmed when the troops entered the community," Jarrett
said.

"Mortar rounds were fired into open areas as
part of a diversion. At no time were persons or buildings targeted. This
diversionary tactic created confusion and disorientation among the
entrenched gunmen, and allowed the JDF to use bulldozers to breach the
barricades and enter the community." .

"First and foremost, this brings into stark
focus the need for a full inquiry into the occurrences of May 2010. It
is terribly wrong that we, as Jamaican people, have to rely on US
documents released under the Freedom to Information Act," she
said.

Goffe said the Jamaican Government should come
clean about the rules of engagement utilised in Tivoli Gardens, an urban
area.

A check of the JDF's website indicates that it
owns two types of mortars.

The 51mm light mortar is a platoon
level, indirect-fire weapon that can be carried and fired by one man.
The mortar is used to fire smoke, illuminating and high explosive (HE)
rounds out to a range of approximately 750m, while the 81mm mortar is a
battalion level, indirect-fire weapon which is capable of providing
accurate HE, smoke and illuminating rounds out to a maximum range of
5,650m.

After the incursion, which took place
throughout May 24 and 25, an investigation was launched by Public
Defender Earl Witter. However, after two years, the report has not been
made
public.