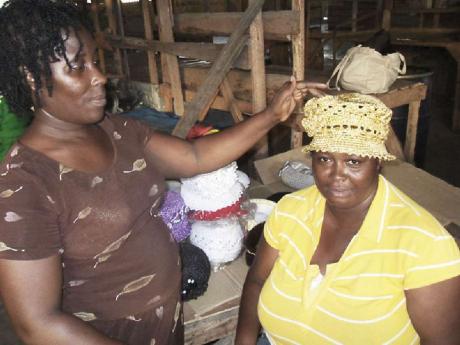 Avalyn Nelson (left), vendor in the Linstead market for more than 18 years, fits a hat she designed on Rhona's head, one of her customers. - Contributed 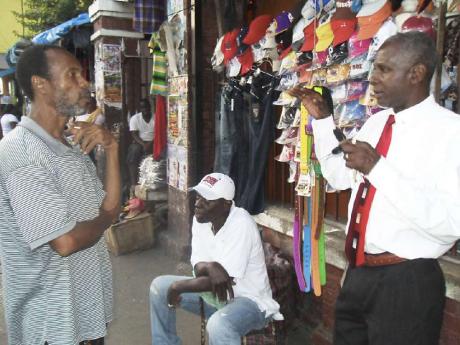 Herbert Garriques (right), councillor Linstead division, speaks with Evon, a vendor, about renovation to be carried out on the Linstead market in St Catherine. - PHOTOS BY KAREN SUDU
1
2

VENDORS AT the Linstead market have welcomed the announcement by Prime Minister Portia Simpson Miller that the facility is to be renovated as part of Jamaica's 50th anniversary of Independence.

The market was made famous by the old Jamaican folk song, 'Carry mi ackee go a Linstead market, not a quatty wut sell'.

Maxine Brown, who has been peddling hats she designed, clothes and other dry goods upstairs the market for more than 10 years, welcomed the news that the facility would be renovated and had her own wishes.

"I want the roof fix, the market paint, light put in, as a matter of fact, me all want AC cause heat a kill me up yah," she burst into laughter.

Lola Weatherly, who also sells clothes and hats, agreed with Brown and also pointed to the need for the implementation of tight security measures to minimise loss of goods.

"We need to get the idlers out of the market because, when them ready, them tear down wi stalls and take away we stuff. Too many idlers. We need security when the market fix," Weatherly said.

In fact, the frustrated vendors gave detailed descriptions of the state in which they found the facility on several occasions.

"In the morning time when we come to the market fi sell, we see human faeces, urine, sometimes used condoms, on the stalls. Sometimes we come, wi stall mash down, so we glad the market a go fix," bemoaned Nelson.

At the same time, Brown and Weatherly said the authorities must ensure that vendors are adequately facilitated during the period of renovation.

"They must make necessary provision for us, because you know this is our source of income so we have to sell every day," Weatherly said.

Even as they welcomed the prime minister's announcement, other vendors were still cautious.

"Mi feel good bout wey de Prime Minister say, but it nah go fix, every time a dat dem say. Mi haffi see it fix first before me get excited. Labourite come in, dem say it a go fix, now PNP a de same ting, me a fi see it fix first," a female vendor in her 50s, who sells vegetables downstairs, decried.

After he was elected councillor for the Linstead division in the March 26 local government elections, Herbert Garriques initiated a plan to transform Linstead. He said the renovation of the market and the Rose Duncan Park, located in the centre of the town, are major aspects of the transformation.

"I am one of the happiest persons to have actually listened to the prime minister in Parliament to hear her saying that she has given the mandate to the UDC (Urban Development Corporation) to repair Linstead market in a wholesome way," Garriques told The Gleaner.

An official from the UDC told The Gleaner that renovation plans are in the preliminary stages.

But the councillor hinted that comprehensive repairs will be carried out on the facility.