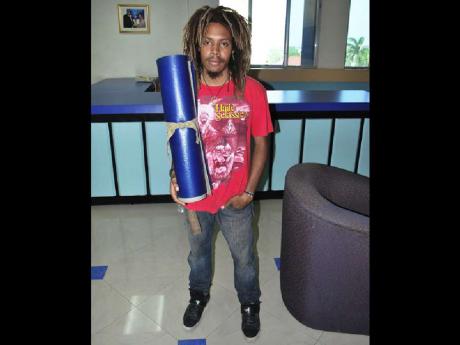 There's no greater love than that between a man and his yoga mat. Of course, this is not a hard and fast rule. In the case of Hado, the self-described nomadic natural healer and yoga instructor, however, it just might be true. He is never without it, and in a way, it signifies what he's all about.

Hado was born Mark McFarlane almost 30 years ago in St Catherine. He attended Jamaica College and Wolmer's Boys' School before studying sculpture at the Edna Manley College of the Visual and Performing Arts. It was during his third year of studies at the college that his life spun out of control.

"I was smoking cigarettes, drinking a lot and having a lot of sex," he said. "Everything was moving fast and I was basically lost. I was living a really crazy life."

Hado's drinking and smoking greatly worried his parents and they tried hard to convince him to clean up his act. The tension between son and parents climaxed one evening in 2003 in a violent confrontation between Hado and his father.

"That changed my life," said Hado.

He seriously injured his right hand in the fight and in the moments that followed, when he was alone in his bedroom thinking about what happened, Mark McFarlane underwent a sudden change that eventually led to him changing his name and his entire way of life.

"I looked into myself and asked, 'What am I doing?' This was not the kind of life I wanted to be living. There had to be a better way," he said. Hado spent hours alone that night thinking about life and how he was treating his body and those around him. It occurred to him that whatever he was putting into his body had to serve a helpful purpose.

"I decided to stop eating anything dead, so I cut out all meat. I stopped smoking and drinking alcohol all because of what happened that evening. I felt the urge to make a drastic change."

He had always been intrigued by what he heard of yoga and the health benefits it purported to offer, so he started attending classes at Yoga Angels in Barbican, and he is now a certified yoga instructor and massage therapist. But he is by no means the average yoga instructor. In fact, Hado leads a life that not many people could handle. He describes himself as a nomad. He spends days just walking with the clothes on his back and his yoga mat, even if he has no destination in mind. "I just let the Earth direct my steps," he said.

Sometimes nightfall will find him by a river or on a beach and he'll just spread his yoga mat and sleep in that spot for the night.

Friends and family have said Hado has completely turned his life around. He has reconciled with his parents and visits them from time to time.

"Sometimes I spend the night with them, but I find that I am more comfortable outdoors."

Hado goes around introducing himself to people, offering his services. He travels to their homes for the yoga sessions. Today, he has about 50 clients across the Corporate Area and in St Catherine. It's certainly not a conventional way of running a business, but it is a business nonetheless.

"My work and my life are one. My life is about helping people and teaching them the things that I have learnt, the things that have helped me to better my life. It gives me great inner peace to bring happiness to people," he said.