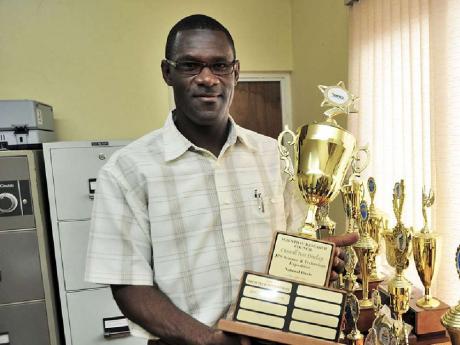 George Henry, principal of Spalding High School, shows off one of several trophies won by the school for various sporting and academic activities over the years. 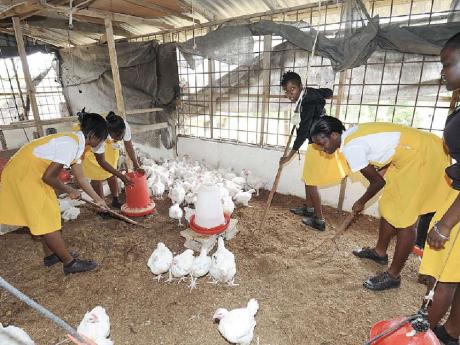 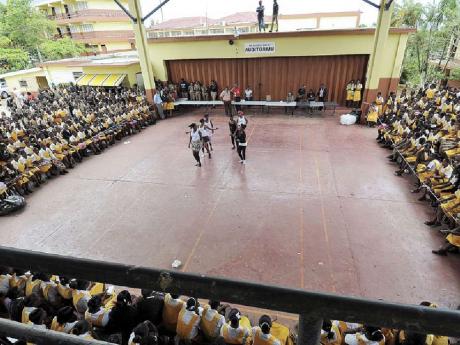 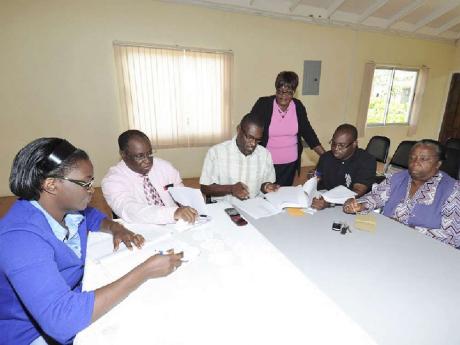 Spalding High School in Clarendon has many reasons to celebrate. Among them is the recent upward movement in its ranking among reclassified high schools to ninth and 12th in mathematics and English language, respectively.

Principal George Henry is proudest of all. A past student of the institution, he spoke to The Gleaner last Friday as the school culminated its celebration of Child's Month with a concert organised by the dean of discipline and staff, in which students performed songs, poetry, dance and DJ tunes.

"We are forging ahead and trying to cope in the difficult times", Henry said. He said the recent success at the annual Penn Relays where the school won a trophy and gold medal for the small schools 4x800m relay, plus five scholarships from the National Commercial Bank and the Jamaica Public Service, have left them on a high.

"Corporate Jamaica has promised more scholarships if the students enrol in tertiary institutions and, for this academic year, one is at the College of Agriculture, Science and Education", he said.

But the real success story is in mathematics. And, according to Owen Battiest, head of the school's Industrial Technology department, mathematics is in demand at Spaldings High. Principal Henry agrees, "Enthusiasm for mathematics is high here because of the approach the school is taking."

Students from neighbouring Knox College, Holmwood Technical High in Christiana, as well as Edwin Allen High in Frankfield, Manchester High and DeCarteret College in Mandeville, are making the trek to the hilltop institution to learn from Battiest's methods. Teachers use modern technological methods such as eLearning labs, and the teachers maintain weekly planning sessions to reap the successes they have.

But figures for CXC show a decrease in passes for mathematics from 51 per cent in 2010 (reflecting the national decline), to 47 per cent in 2011. For English Language, the 2010 results were 79 per cent and increased in 2011 to 88 per cent. With the Mathematics club and other initiatives, Henry hopes to see better results this year.

The school has done well in other areas, gaining 100 per cent passes in home economics, geography, office administration, electronic document preparation and management, physical education, principles of business and technical drawing and 95 per cent in accounts.

"They are motivated by the results", affirmed vice-principal Reverend Arthur Brown, adding that the students attend a four-hour class on Saturdays and are fully focused for the duration. They hardly want to take the break.

Battiest told The Gleaner that the school conducts weekend mathematics camps and the teachers use specially created modules for the students to work with. The modules are strictly adhered to and that accounts for the upsurge in enthusiasm among students.

During The Gleaner's visit, plans were in high gear for the graduation exercise set to take place later this month, but Spalding High is not among schools with a high price tag for the ritual. The committee members said students usually wear uniforms beneath the gowns that are owned by the school.

"We don't have to rent graduation gowns because we have our own, in fact. we even rent them to other schools, noted Dawn Chambers, a member of the graduation committee. Some 220 students will graduate this year.

But Henry is equally proud of the farm and the more than 300 five-week-old broilers to be raised for the canteen. He believes that it is good for students to participate in projects from which they can benefit, hence the farm. Agricultural science master Clayton Bryan guides the students in raising chickens for the school.

"The bulk of the meat is consumed by the canteens, but teachers purchase the surplus," Henry said. The students get to do their CXC school-based assessment work in the chicken houses, raking the litter daily. "This ensures there is no ammonia build-up," said Bryan.

With just over two weeks left for the end of the school year, the students have already reaped corn, pak choy, string beans, cabbage and cucumbers. They are now preparing the soil for next year's crops. Henry is hoping that the greenhouse recently promised to the school by the junior minister for agriculture and fisheries, Ian Hayles, will be a reality soon. Sponsors of the Child's Month celebration were: Patta Cake, Corporate Strategies Limited, Rainforest Seafoods, Crazy Jim, Barita, Mandeville's Patmore's Hardware, Spaldings' Juici Patties, and parents Raymond Nesbeth and Audrey Hepburn.