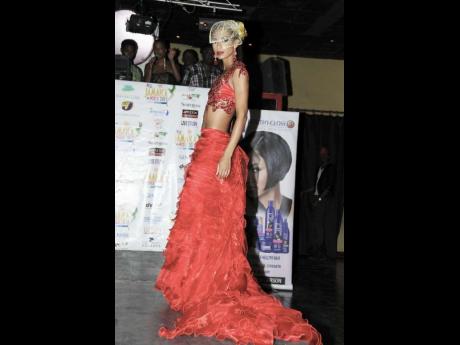 In this latina-inspired Uzuri number, Miss Venus Embrace, Trishauna Clarke, lit up the catwalk in this red-hot number. - Photos by Winston Sill/Freelance Photographer 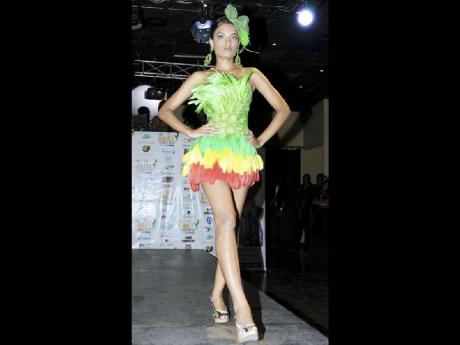 In this rastafarian-inspired feathered ensemble, Anastacia looks like an 'Empress' fit for the catwalk.
1
2

Fiction was transformed into a fashionista's playground. If you were not there you missed quite a fashion show, as the 2012 Miss Jamaica World contestants were transformed into runway divas. Those in attendance were treated to a fabulous fashion showcase featuring swimwear by The Mushroom and sleek couture pieces from fashion house Uzuri International, adorned with hats by Hatitude's Karl Brown.

With all the right attributes of a model - height, style, striking facial features and pose - Miss Acropolis Gaming and Entertainment Centre, Adrianna Bryan, came out on top. Coming in second was Miss Dark and Lovely, Saneta Kerr, and rounding out the top three was Deanna Robins, Miss Dunns Electrical.

For this Fast Track Model Competition, the girls were judged on style - how well the fashions were presented, grace on stage, personality in showcasing the pieces, technique and overall ability to show garment and work the stage and audience.

Adrianna is now the second contestant to be fast-tracked into the Top 10, joining Trishauna Clarke, who won MJW JustBet Sports competition on Tuesday.