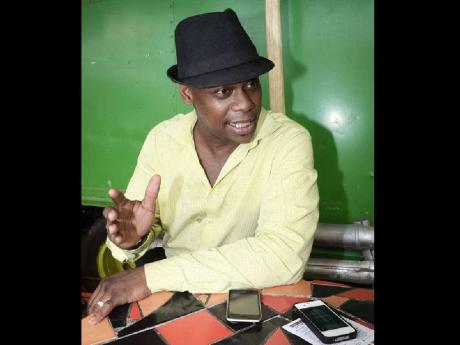 No stranger to our television screen, starring in movies such as Strapped, Ray, and The Fifth Commandment, Bokeem Woodbine was born in Harlem, New York, to an actress mother.

He attended the prestigious Dalton School in New York before transferring to the also prestigious LaGuardia High School of Music & Art and Performing Arts, in the city. He was an instrumental music major, and the lead singer for the band Mazard.

Bokeem, affectionately referred to as Bo, is also a talented rock musician who both composes songs and plays the guitar for his band 13 Purple Dragons. He has been in the movie business for 17 years, but has now reached the transition where people are knocking on his door.

Music came first, since he has been playing the guitar from age 12. He got his first lead movie role by Forrest Whittaker in the movie Strapped. It was just by chance that he got the opportunity. However, he says that it was an opportunity he took very seriously.

The actor is in Jamaica scouting film locations and partnerships for his company.

"There is an infinite amount of talent with the music and the people and I want to be a part of bringing the underutilised resources that is, the people of the islands, to the public consciousness of the people through film," he states.

He wants to do business with Jamaica, but he also wants to be part of the Jamaican family.

Woodbine Enterprises, a comedic company, will be focused on shooting films with a costing of between $3-$10 million.

His first film produced by his company is Balance, written by Kamikaze with characters from various islands. Kamikaze reveals that the script was written about 10 years ago during a one-off visit to Jamaica.

Just-shot Total Recall is a science fiction movie starring Jessica Biel, Colin Farrel and Kate Beckinsale. "It's really about what the future will be like if the world does not change," he says. The original was more "fantastical", but this new one, he says, will be more about the real-life things that will happen.