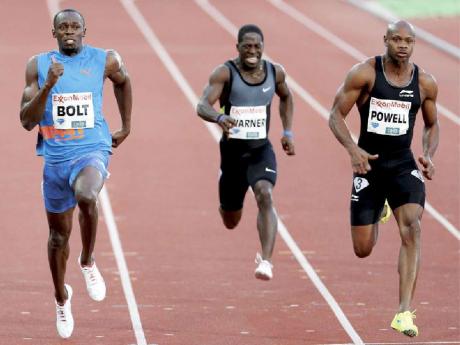 Jamaican Usain Bolt overcame a sluggish start to produce a blistering finish, getting up in the final few metres to beat compatriot Asafa Powell and set a new meet record at the Diamond League Bislett Games in Norway yesterday.

The reigning double Olympic sprint champion looked beaten at the halfway point, but accelerated quickly, drawing level with Powell after 80 metres before nipping his fellow Jamaican at the line in 9.79 seconds, in a thrilling finish.

"The starting reaction was good, but I did not have the flow in the first metres like in Rome. Overall, technically, the race was not as good as in Italy, but I showed I can compete well under pressure," Bolt said.

"I'm pleased to win here for the second time. I will now go back to Jamaica, work on a few things, and run at the trials. Especially, I need to work on my start. After the trials, I have only one race planned, over 200m in Monaco."

Powell, running out of lane three, got a great start and led for most of the race before Bolt snatched the late win.

He was second in a season-best 9.85 seconds while another Jamaican, Lerone Clarke, finished third in 10.10.

The
29-year-old Powell has now lost 11 of his last 12 meetings with the
world record holder.

Bolt now owns the three fastest
times of the year after his world-leading 9.72 seconds in Rome last week
and his season-opening 9.82 at the Jamaican Invitational in Kingston
early last month.

In the men's 400 metres hurdles,
Trinidadian Jehue Gordon turned in an impressive performance to clinch
second behind Puerto Rican Javier Culson, who clocked a world-leading
47.92 seconds.

Gordon was timed at a season-best 48.78
seconds while American Justin Gaymon finished third in a season-best
48.97.

Meanwhile, Jamaican Patricia Hall carved out a
personal best 50.71 seconds in the women's 400m to follow home World
champion Amantle Montsho of Botswana, who clocked 49.68 to win
handsomely. Shericka Williams was fifth in
51.56.

There was disappointment, however, for the
Jamaican trio of Sherri-Ann Brooks, Kerron Stewart and Sherone Simpson,
who finished down the field in the 200 metres behind winner, 24-year-old
Ivorian Murielle Ahoure (22.42).

Brooks's season-best
23.16 was only good enough to place her fifth while Stewart, an Olympic
bronze medallist, finished sixth with 23.19, and Simpson seventh in
23.32.

In the 100 metres, there was more
disappointment for Jamaica as 2006 Commonwealth Games champion
Sherri-Ann Brooks finished third in 11.44 seconds, as Norway's Ezinne
Okparaebo took the tape in 11.31 seconds.