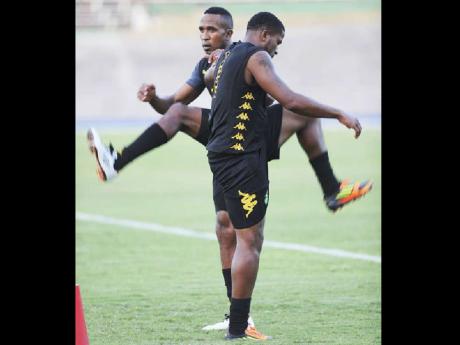 The experimental stage is behind us and it is now time for the real deal, as the Reggae Boyz continue their quest to qualify for the 2014 World Cup to be staged in Brazil.

Jamaica will tackle 83rd-ranked Guatemala in their opening Group A match in the semi-final round of CONCACAF World Cup Qualifying (WCQ) at the National Stadium tonight, with game time set for 8:30.

The other two members of the group - United States and Antigua and Barbuda - will meet at the Raymond James Stadium in Tampa, Florida.

Jamaica will be without prolific striker Marlon King who, along with new invitee Chris Humphery, was suspended for two games after breaking a curfew following the June 1 meeting with Panama in Panama City. The squad is, however, not short of attacking options with the likes of Luton Shelton, Ricardo Fuller, Ryan Johnson, Dane Richards and Demar Phillips expected to lead the fight.

The Boyz will line up in the usual 4-4-2 formation, and head coach Theodore Witmore is confident of victory.

"The players know what they have to do; we have been working all week and the hunger, the commitment and the focus is there, so I don't see what should stop us from getting three points tomorrow," Whitmore shared after last night's training session at the National Stadium.

Jamaica, ranked 51st in the world, have never lost to their Central American counterparts in 12 meetings, registering nine victories, with three of the encounters ending in draws. The last two encounters between the teams saw the Reggae Boyz come away with 2-0 victories.

These factors should contribute to the Reggae Boyz being very confident ahead of tonight's game, but this confidence might have been dented slightly by two consecutive friendly losses to Panama. Jamaica suffered their first defeat at 'The Office' since 2007, going down 1-0 to the Panamanians on May 27, followed by a 2-1 defeat in the return fixture five days later.

"Practice games are different from competitive football. We have put the Panama games behind us and we are looking forward to our first World Cup qualifying game at home," Whitmore reasoned. "We are positive and the training sessions since we came back from Panama have been positive, so we are just thinking positive going into tomorrow's game," he added.

Guatemala, on the other hand, are coming off a rare win over Costa Rica, after registering a morale-boosting 1-0 victory, thanks to a headed goal by their leading goalscorer and captain Carlos Ruiz.

The veteran striker is seeking to lead the Guatemalans to their first-ever World Cup and it is expected that he will be joined in attack by Chicago Fire star Marco Pappa.

"We need to focus, as we have the first game against Jamaica, which is one of the best national teams in the Caribbean, so we want to try to play good and hard, and we will see after the game what is the other result between the United States and the other island," he outlined.

He added: "We will see if we can tie or win here and then we receive the United State at home and try to win that game," Ruiz shared following Tuesday's first training session. "The main point is to come here and tie or win the game."

There are 12 teams in the Confederation of North, Central American, and the Caribbean Association Football that are still eligible for qualification for the 2014 World Cup. The nations have been separated into three groups. The winners and runners-up in each group will advance to next year's six-team final round.