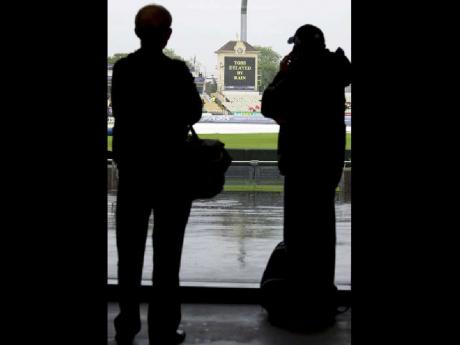 Spectators take shelter from the rain as the start of the third Test match between West Indies and England at the Edgebaston cricket ground in Birmingham yesterday. - AP

Rain wrecked the opening day of the third and final Test between England and West Indies at Edgbaston here yesterday, forcing play to be abandoned without a ball bowled.

Persistent rain ensured that ground staff was forced to keep the playing area covered through the day and also prevented captains Darren Sammy and Andrew Strauss from spinning the toss or declaring their final XIs.

Lunch was taken half-hour early at 12:30 p.m., but steady rain continued into the afternoon, and umpires Kumar Dharmasena and Tony Hill eventually called off play at 3:30 p.m., just minutes before the scheduled tea interval.

"As a team, we're disappointed. We said if we could win a Test in England, it would be an achievement for the team, so we needed as much as play as possible," a frustrated Sammy said afterwards.

"We're quite disappointed the weather has intervened for the entire first day."

Rain has been a feature of the Windies' wretched tour, ruining the opening three-day tour match against Sussex at Hove early last month before also washing out the last day of the two-day warm-up game against Leicestershire at Grace Road last weekend.