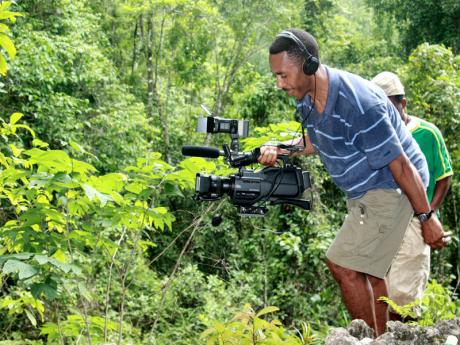 Film on Maroon history to be shown in Charles Town

Just as Emancipation Park provided an electric outdoor setting for the premiere of the highly acclaimed Marley documentary, Asafu Yard in Charles Town, Portland, will be sizzling on June 22 as Action 4 Reel Flimworks, in association with the Institute of Jamaica, the Jamaica Social Invest-ment Fund, and the Charles Town Maroons presents the world premiere of Akwantu: The Journey on a night billed as the 'Night of the Ancestors'. Viewing is at 6 p.m.

The film's producer-writer-narrator-director, Roy T. Anderson, as well as other members of his production team, will be in attendance.

The Jamaican Maroons were considered the Spartacuses of their time, except these enslaved Africans were victorious in their fight for freedom. This fact is not lost on Jamaica-born, New Jersey-based filmmaker and stuntman-stunt coordinator Roy T. Anderson.

After years of research and dozens of interviews that took him from remote regions of Jamaica's Blue Mountains to the coastal environs of Ghana and its interior, then finally to the historic and mystical community of Accompong, St Elizabeth, he conceived Akwantu: The Journey.

Akwantu: The Journey, a Jamaica50-endorsed film, documents the struggles for freedom of the Jamaican Maroons, rebel slaves of West African origin who defeated the mighty British army and formed independent communities in the rugged and remote regions of Jamaica in the mid-18th century. The descendants of these communities still maintain their proud heritage today. Yet so little is known about the Maroons, whose very rich culture and heritage are threatened with extinction.

"That would be a tragedy," says Anderson, a proud descendant of the Leeward Maroons. "They were, after all, the New World's first successful freedom-fighters."

Shot in Jamaica, Ghana, Canada, and the United States over the course of three years, the film features interviews with world-renowned scholars, African nationals, Maroon officials, and present-day Jamaican citizens (both Maroon and non-Maroon), while simultaneously capturing Anderson's personal journey of self-discovery from Maroon society to the North American continent.

Akwantu: The Journey explores a significant area of Jamaican culture that has long fascinated observers. In fact, UNESCO recognised the international significance of Maroon heritage in 2003 by naming the musical heritage of the Moore Town Maroons one of the masterpieces of intangible history, and the Jamaican Ministry of Youth and Culture commended Akwantu: The Journey as a welcome addition to its cinematic landscape.

For more than 25 years, Anderson, an award-winning stuntman and world-record holder, has performed stunts for such Hollywood stars as Will Smith, Denzel Washington, and Jamie Fox. In his illustrious career as a stuntman and stunt coordinator, he has accumulated more than 400 production credits, appearing in blockbuster movies such as Spiderman 2, The Bourne Ultimatum, Hitch, American Gangster, and top-rated TV shows such as Law & Order, The Sopranos, and Boardwalk Empire.

Anderson has also done stunt work in Men in Black III, currentlyshowing worldwide, and will appear inThe Dark Knight Rises, the next Batman movie, in cinemas in July.

So far, Akwantu has been screened to rave reviews in Toronto, Canada; at Georgia State University, Atlanta; in Poet's Den Theater in Harlem, New York. It will be screened in Charleston, South Carolina, in June, and in Boston, Massachusetts, in October.