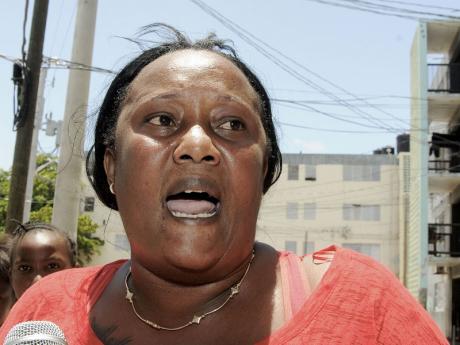 Taneisha, 'Dudus' cousin, commends on the 23 year sentence handed down in a New york court yesterday to the former Tivoli Gardens a don.

RESIDENTS OF Tivoli Gardens dissolved into tears yesterday when news broke that their "beloved Don" Christopher Dudus Coke had been sentenced to 23 years in prison in the United States (US).

Men and women mirrored the seemingly defeated look of a community, a far cry from the defiance and rambunctiousness for which the community earned infamy.

Coke's elderly aunt, who identified herself as Debbie Burps, initially sought to put on a brave face in the lead-up to the announcement, but broke down later when the news arrived and was unable to speak.

Other women who spoke through tears as they wept openly on a day when the people seemed unaware of the increased presence of the security forces, even as the men wore forlorn appearances.

The padlocked doors of the usually open constituency office in the community centre bore testimony of the jaded appearance of the residents as they awaited news of the sentencing.

Coke's younger cousin, Taneisha, who had travelled to the US to watch the trial, seemed overwhelmed but was able to vent her feelings. "Come on now, he is one man against the world. What did you expect?" she asked amid the tears. "You know the US government. There is no way that I could win them."

Taneisha said she had been in constant contact with Coke in the lead-up to his sentencing. "He told me that he knew it was unfair but he wrote me to say that it was going to happen, so I was expecting it. He knew from day one that he would never get any justice as he is one man in America and one man against the world."

Other residents expressed disbelief that the judge had bought evidence submitted by two men and a woman with "questionable" characters at the evidential hearing.

Taneisha aptly summed up the mood of Tivoli Gardens resident when the news broke and the cellphones began ringing. "Everybody is upset, everybody is just really disappointed because I was planning to go to the airport anytime (as she hoped against hope.)

The following are excerpts from Dudus' statement to a New York judge on Friday.

"Sir, I'm not gonna stand here in this court and tell you that I'm a saint and I've never done anything wrong in my life, but these negative things that they are talking about me does not describe the true person that I really am."

"I'm a good person, and I have done a lot of good deeds for persons in my community. These things they are saying are not factual. Because of this, Your Honour, I am asking you to use your discretion and consider the good deeds that I have done."

"It would seem as if these persons know me more than me, 'cause those things they are talking about, I would never ever dreamt [sic] of doing."